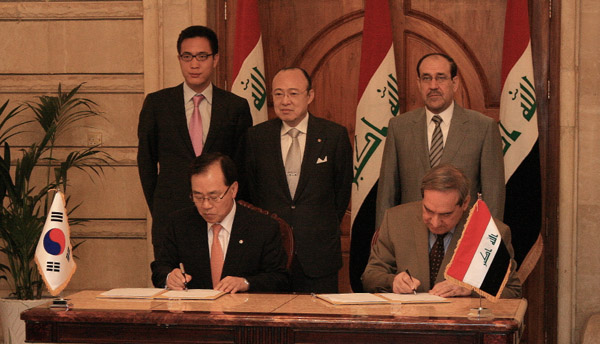 
When Hanwha Group signed a contract to construct a new city in Iraq, the accumulated value of overseas construction orders of Korea’s total overseas construction surpassed $500 billion for the first time in almost half a century. The Bismayah new city project, which is almost similar in size to Seoul’s Bundang, will create a new city on a 1,830 hectare (4,522 acre) site with 100,000 residential units at Bismayah, 10 kilometers (6 miles) south-east of the capital Baghdad. This project will be performed in a "Design Build" method in which designing, supplying and construction are all combined, including the water and sewage facilities and roads construction. 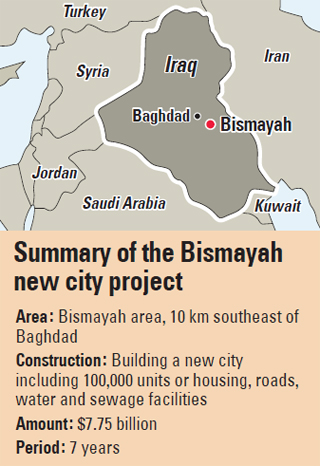 Chairman Kim delivered thanks to the two governments and asked for active cooperation from the related offices and government offices for a smooth construction. Chairman Kim said, I am sure that the Bismayah new city will be a new home for the Iraqi citizens and we hope to become good companies through cooperative relationships in various industry fields.

As this new city construction is the largest project in Korean construction history, cooperative companies, a hundred of small and medium size companies supplying material and goods and 1,000 employees (excluding staff from third countries), will be stationed at the site together. As many local companies are asking for ways to participate in this project together, this project is expected to contribute greatly to the concurrent growth of small and medium sized companies.

As the first contractor of the Iraqi new city project, Hanwha Group will also participate actively in building production facilities, such as power plants, oil refinery factories, petrohemical factories and power generation facilities using solar energy that will be used in the school within the new city, as well as basic infrastructure such as railroads, ports, roads and a 1,000,000 house residential unit construction. 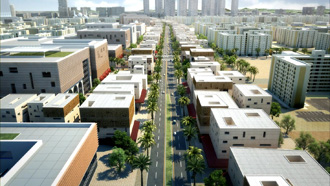 An aerial, computer-gener-ated view of a street in Bis-mayah. By Ko Ran

This Bismayah new city project is being conducted in a “Design Build” method where Hanwha will be in charge of design, supply and construction. At 1,830 hectares, the city 10 km southeast of Baghdad will contain 100,000 unit houses including infra-structure such as roads, water and sewage facilities. The designs were made to reduce production costs and for about a year the project design was reviewed to check if the production cost was suitable. The total construction period is seven years and the order value is $7.75 billion; 25 percent of the order value is paid in advance. Since the contract includes a provision for inflation adjustment, the total value will reach $8 billion.

Since Hanwha E&C will be building the 100,000 unit residential construction and infrastructure construction at once, the project will be done through a PC (Precast Concrete) method.

The PC method produces the subsidiary materials such as pillars, walls and beams at a factory and ships and sets them up at the construction site. It reduces the construction period and does not fall behind in economic feasibility and in quality. This method was used during the Libya residential construction project by a Korean company. Once this project is right on track, Han-wha E&C will be constructing and supplying a Jamsil 3 block (4,000 houses) scale apartment every two months.

For this project, Hanwha has constructed the world’s largest PC factory near the construction site and will be in charge of the big task of constructing the largest scale new city in overseas construction history. 1,700 employees will be working in the PC factory to produce 20,000 slabs and walls per year. 6,400 tons of concrete will be used a day, approximately the volume of 430 ready-mix-trucks. Since this project needs 26,000 staff a day, including on-site staff, the company is planning to create a 120-building base camp on 1,100,000 square meters of land.

The Iraqi government will be in charge of the financing and house sales of this project and Hanwha E&C will be in charge of designing and constructing the residential units and the infrastructure. Since last year, the government has started selling houses to its civil workers, the subscriptions have been completed successfully for all 100,000 units and the house installment contracts will be finalized shortly. The Iraqi government will provide financing through the government and the cost received for the apartments. Rasheed, TBI and Rafidain, the three state-run banks of Iraq, have promised to certify the payments.