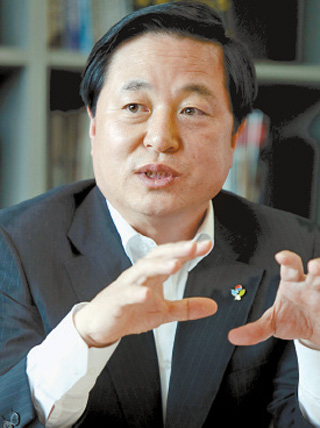 South Gyeongsang Gov. Kim Du-kwan, a rising presidential contender of the Democratic United party, said it would be “extremely dangerous” for a political independent to run the country. No matter how talented the person was, Kim said, without a deep background in politics, he won’t be able to do the job.

Kim was clearly referring to software-mogul-turned-professor Ahn Cheol-soo, a highly popular independent who many liberals think would be their strongest candidate. Ahn has not declared candidacy for the race.

In an interview with the JoongAng Ilbo Wednesday, Kim spoke about his presidential ambitions and his views on key issues. The 53-year-old veteran politician expressed confidence that the candidate chosen by the Democratic United Party will eventually be supported by all liberal parties in the December race.

Regarding the DUP’s presidential primary, Kim said, “The winner in the Jeolla region will be the DUP’s presidential candidate,” adding that he is increasingly seeing support in the region. “The competitiveness of Moon Jae-in showed some limits during the April legislative elections,” Kim said. “And the Jeolla region is moving to support me. In comparison to Moon, my competitiveness is the ability to widely communicate with all regions and all classes.” 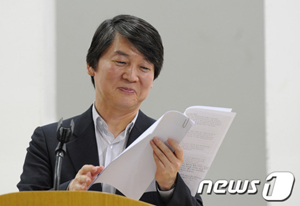 Moon is the former chief of staff of former President Roh Moo-hyun, and many political observers said Moon and Kim share the same support base within the pro-Roh faction and strongholds in South Gyeongsang. “Moon was my partner, but he is a fierce competitor now,” Kim said. “Moon also said I would be his strongest competitor. I think our competition can also generate some synergy.”

Kim expressed confidence that his support was rising in the Jeolla region. “Last year, Sohn Hak-kyu was elected party chairman because the Democrats made a strategic decision that it would be advantageous for the party to have a non-Jeolla politician as its leader,” Kim said. “That trend translated into support for Moon. But Moon’s competitiveness has shown limits, and the support is now moving to me.

“I will be the non-Jeolla candidate supported by Jeolla,” Kim said.

A native of Namhae, South Gyeongsang, Kim studied political science at Dong-A University. He founded the local Namhae Shinmun in 1989 and worked as its publisher until 1995. His political career began in 1995 when he was elected county head of Namhae County in South Gyeongsang. He was the youngest local government head to be elected and was re-elected to the post three years later.

In 2002, he joined Roh’s presidential campaign and led the South Gyeongsang election camp. After Roh won, he was named home affairs minister in February 2003.

Kim, who broke away from the Democratic Party, the predecessor of the DUP, in 2008, joined the largest opposition party last February.

Calling himself a “veteran fighter,” Kim said he has no worries about going up against political heavyweights in the presidential primary. “I have to win the primary and consolidate the candidacy with Ahn,” Kim said. “And then I have to beat the Saenuri Party’s candidate.”

Stressing the importance of party politics in a democracy, Kim said a candidate who has never run in an election has a critical weakness because his abilities were never tested.

Asked about the future of the alliance with the Unified Progressive Party in the presidential election, Kim said the allegedly rigged primary of the UPP in March to elect its proportional representative candidates violated the principles of democracy.

“Rather than calling it an alliance with the UPP, I think it is more appropriate to join with the groups such as farmers’ groups and the Korean Confederation of Trade Unions that really represent liberal values,” Kim said. “The UPP doesn’t necessarily represent the liberals.”

He also stressed that his life has been the opposite of the Saenuri Party’s presidential front-runner Park Geun-hye. “She has lived a high-class political life in a palace,” Kim said. “And that is clearly different from my life. It will be a battle between the princes and the people’s son.”

“I have heard concerns that my weakness is in defense and foreign affairs,” Kim said. “I agree and I have worked hard to make up for these shortcomings. I have studied in the field for six months at China’s Peking University.”

He said the U.S.-South Korea alliance is very important, and Korea’s relationship with China is equally important.

Kim said North Korea is a partner in endless negotiations to seek peaceful unification, but it is still an opponent that creates strong military tensions. “Although we have to provide humanitarian aid, we must criticize the North when it deserves it,” he said. “The North’s regime and the people should be treated separately when we provide humanitarian aid.”

He said he doesn’t agree with the Saenuri Party’s proposed law on North Korea human rights because it provokes the North unnecessarily while failing to provide substantial support to those in need.

“It is also wrong to label someone as unconditionally supporting the North if he doesn’t agree with the Saenuri Party’s North Korea human rights bill,” Kim said.

Dismissing speculation that his presidential ambitions would end if he loses the DUP’s presidential primary, Kim said his job as the governor of South Gyeongsang, with a population of 3.4 million, was not an easy one, although it may be small when compared to the job of the president.

“Do you think I will quit the governorship to become a mere pacemaker in a presidential primary?” Kim asked. “I have run in 11 elections in my life, and won five and lost six. I don’t want to do any more losing battles.”