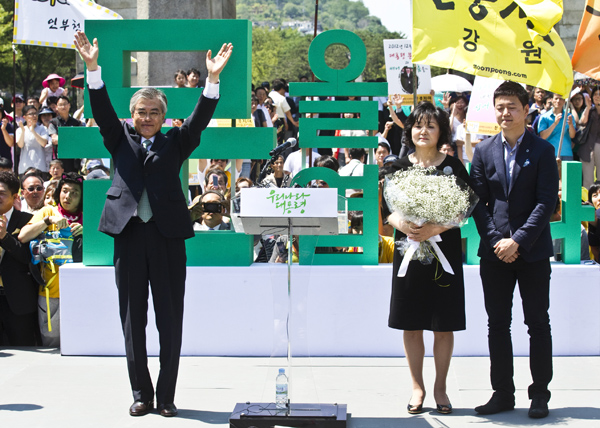 Moon Jae-in, left, a Busan-based lawmaker of the main opposition Democratic United Party and a close aide to the late President Roh Moo-hyun, announces his presidential bid yesterday with his wife Kim Jeong-suk and his son Jun-yong on the stage at the Independence Park in Seoul. By Kim Seong-ryong

The DUP lawmaker, considered a strong presidential hopeful of the main opposition party, held a rally at Independence Park, central Seoul, after visiting Seodaemun Prison, where he was jailed for four months during the student demonstrations of 1975.

“I will become the president of ‘our country’ where ordinary people are the owners of the nation,” Moon said. “This country is not controlled by politicians but by the participation of citizens in a nation with fairness and justice where all ordinary people have opportunities.”

Moon served as the presidential secretary of civil affairs under President Roh, whose official political slogan was “an administration with participation.” Both were labor lawyers in Busan during the unrest in the 1980s.

The 59-year-old won a geographic seat in Sasang District, western Busan, in the April 11 legislative election.

In announcing his candidacy, Moon pledged to stand by his “four strategies of growth”: embracing economic growth that strengthens distribution and welfare; creative growth that promotes cultural and educational revolutions; green growth that tackles climate change; and cooperative growth that encourages interaction beyond national boundaries.

The core of his platform is job creation.

“If I become the president, I will launch a presidential committee for job creation and hold a meeting monthly to check the current job market and encourage policy makers to take measures,” Moon said. “I want to be seen as a president who revolutionized job creation.”

“One of the worst things the Lee administration did was ruin inter-Korean relations,” Moon said. “We need to come back to the implementation of the June 15th North?South Joint Declaration and the Oct. 4 Declaration.

“I think we need to hold an inter-Korean summit not like a special occasion, but a regular and ordinary meeting during the presidency.”

Moon, however, affirmed that he would not accept North Korea as a nuclear state.

“My position is not to accept North Korea’s nuclear weapons program,” he said. “I will make them give up nuclear weapons through negotiation and restore the six-party talks.”

When it comes to the Korea-U.S. free trade agreement that some hard-line liberal politicians say should be dissolved, Moon said that the bilateral economic pact should continue to be implemented.

“The Korea-U.S. FTA has been enacted, so we need to implement it,” Moon said.

“However, as the DUP has previously stressed, we need to make efforts to reduce the so-called ‘poison clauses’ through renegotiations with the United States.”