Memorial for ‘comfort women’ set up in NY

Memorial for ‘comfort women’ set up in NY 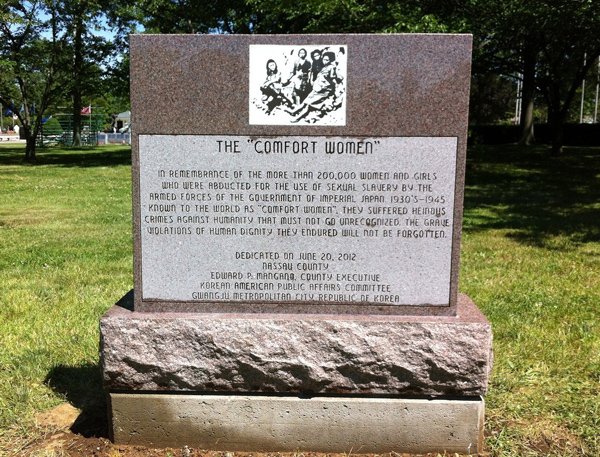 A monument in New York dedicated to the Korean women who were forced into sexual slavery by the Japanese military during World War II.[YONHAP]


NEW YORK - Local governments from Korea and the United States as well as members of the Korean-American community have jointly set up a monument in New York dedicated to the Korean women who were forced into sexual slavery by the Japanese military during World War II, community officials said Saturday.

The red granite monument at the Veterans Memorial at Eisenhower Park in Nassau County is the second of its kind in the United States following the first one set up at Palisades Park, New Jersey, in 2010.

Japanese officials have lobbied local administrators to remove the New Jersey monument, a reminder of the continuing efforts to play down the country’s wartime atrocities.
Historians say up to 200,000 Asian women, mostly Koreans, were forced to serve as prostitutes at front-line Japanese military brothels during the closing years of the war. The Korean Peninsula was a Japanese colony from 1910-45.

The issue of the aging victims, euphemistically called “comfort women,” is one of the most emotional and unresolved issues between Korea and Japan.

The second monument in New York was jointly dedicated by Nassau County, the city of Gwangju and the Korean American Public Affairs Committee, committee officials said.

“While the Japanese government and lawmakers have requested the removal of the monument at Palisades Park, they will not dare request this monument be removed because it was set up by our Korean-American community, as well as local governments from Korea and the U.S.,” said Lee Cheol-woo, who chairs the committee.

It will hold a ceremony to officially mark the setup of the monument on Wednesday, when Gwangju Mayor Kang Woon-tae visits the site, Lee said.

The monument in New York records how Japan’s wartime military kidnapped about 200,000 women and girls for the purpose of “sexual slavery,” adding that the world will not forget this “heinous crime.”

Most of those former sex slaves have died. The few survivors, all in their 80s and 90s, are pressing Japan to apologize and pay compensation.