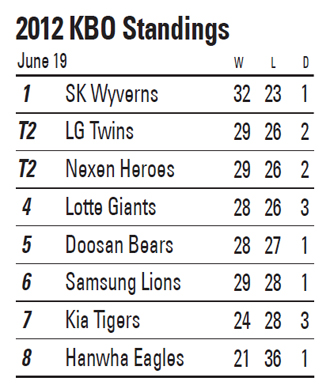 The SK Wyverns cemented their first-place standing last week with four wins and two losses against the LG Twins and Hanwha Eagles.

The Incheon-based team’s future looks bright, as players return from injuries and the starting pitching rotation stabilizes. Left-handed ace Kim Kwang-hyun, who came back June 2 after being out nearly eight months, has a 0.56 ERA in three straight wins.

And new foreign pitcher Dave Bush, 33, who replaced Aquilino Lopez, had an impressive debut. The right hander, who has 56 wins in Major League Baseball, on Saturday faced the Hanwha Eagles’ Park Chan-ho, who holds the MLB record for most wins among Asian players with 124 wins. Bush allowed a run in seven innings in a 3-1 Wyvern victory. On Saturday, Wyverns fans had more good news as catcher Park Kyung-oan played for the first time in 379 days. The 40-year-old, who holds the record for most games played in the KBO (2,028), is looking to become the oldest player to get 1,000 RBI. He needs six more.

The Wyverns play the Lotte Giants tonight and Kia Tigers on Friday. The Wyverns and the Giants have split six games this season. Against the Tigers, the Wyverns are 4-1, with a draw.

The three-game series with the Giants will be a classic pitching versus hitting matchup. The Wyverns have the league’s best ERA (3.71), while the Giants own the highest team batting average (.270). The Giants yesterday acquired veteran catcher Yong Deuk-han from the Doosan Bears for pitcher Kim Myung-sung. Yong will back up Kang Min-ho. The last-place Eagles opened the week with three losses to the Samsung Lions then two to the Wyverns, but beat the Wyverns 5-2 on Sunday to avoid a second sweep.

Eagles slugger Kim Tae-gyun finally slipped below .400, but he is still leading the league in batting, while strikeout leader Ryu Hyun-jin is expected to return from back surgery. The Eagles host the Twins and Bears this week.