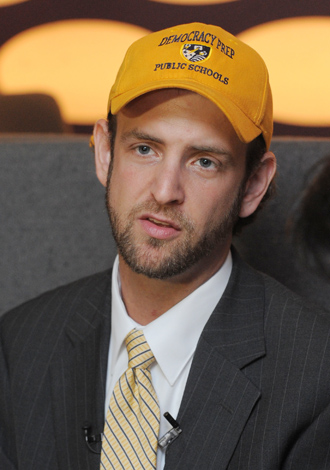 “One of the big values I took away from Korea is that even though the Korean education system is one of the best in the world, nobody here thinks that the Korean education system is good enough and nobody is satisfied with being one of the best countries in the world,” said Seth Andrew, the 31-year-old New Yorker who founded a revolutionary school in Harlem that boosted the education level of under-privileged students in New York following a Korean model.

Andrew spoke as a guest speaker at an international education conference in Seoul on Thursday, where he was critical of the educational system in the United States, stating that there are 15 million low-income students, only half of whom graduate from high school.

And he said that “the belief that you can do better” has propelled Democracy Prep, which has lottery-based admission and free tuition and now sees over 5,000 students apply for the school in one of the poorer congressional districts in the United States.

At the conference, he was once more reunited with the educator who gave him heartfelt respect for the Korean educational model — the principal of a middle school in Cheonan, South Chungcheong, he had taught in over a decade ago.

Andrew, who was on a 10-day trip to Korea with his wife, stated that a huge inspiration for following the Korean educational model was thanks to the positive experience he had as an English teacher here, where he was moved by the hospitality of the Dong-sung Middle School principal and faculty.

“They welcomed me to their community with open arms, took me out to meals and made me feel like family,” he said, and he was awed by the environment in which teachers are treated with reverence.

He brought that experience with him to the United States, where he founded Democracy Prepatory Charter School in Harlem, New York, in 2005, which has slowly expanded to six campuses from kindergarten to the high-school level and has plans to expand the school by two campuses a year. Students in the Democracy Prep Charter High School work longer hours than the average New York student and are required to learn Korean as a second language.

None of the students are Korean and most are from low-income families, hence Andrew, who is also superintendent, believed that learning a foreign language will give them a boost in college applications.

Andrew shared a video clip of his students, none of them Korean, greeting the conference with Korean language. The video impressed some 500 educators from here and abroad attending the first EBS-hosted “International Conference on Educational Media 2012” held at the Korea Chamber of Commerce and Industry, central Seoul, on Friday. Other panelists included the Daejeon superintendent and educators from Finland and Singapore, countries that have high educational standards.

Even among hundreds of teachers, with his trademark yellow cap and matching yellow tie, Andrew stood out.

There is a story behind the yellow cap, the color of the 2B pencil, the school bus and cabs in New York, said Andrew in an interview with the Korea JoongAng Daily at the conference.

He turned around to show the words “change the world” embossed on the back of the cap.

Students of his school can earn the honor to wear this yellow thinking cap for any contributions they make to society or school that can “change the world.”

“It’s an honor for our students to earn a hat. About half our students have it.” Students have to testify in front of the City Council, do community service or be a leader of a project, he said, providing some examples of ways to earn the privilege.

And Principal Yoo Jae-heung of the Cheonan Dongsung Middle School, the only person at the conference to have also earned the yellow cap thus far, said, “He has helped to change the world for my students. He helped me; I was his student.”

Yoo, meanwhile, said, “Mr. Andrew is a legend in our school though he stayed just a little over half a year.”

Now, it is Andrew’s quest to bring his 40 juniors to Korea. “We have many people who are interested in hosting us and working with the students once we are in Korea,” said Andrew.