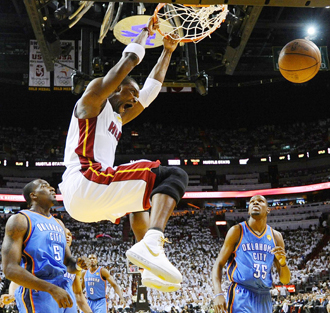 MIAMI, Florida - Miami’s dominance from the free-throw line proved strong enough to quell the Oklahoma City Thunder in a fierce fourth-quarter battle as the Heat claimed a 91-85 Game 3 victory on Sunday and a 2-1 series lead in the NBA Finals.

The Heat outscored the Thunder 31-15 from the line, making all but four of their attempts as they cashed in on opportunities won with their relentless attacks to the rim, while Oklahoma City made just 15 of 24 from the charity stripe.

“This is competition at its highest,” Heat coach Erik Spoelstra told reporters. “We kept on mentioning that in the fourth quarter. That’s what this is about. We’re facing great competition. We showed some resolve there in the second half.”

LeBron James, who led the scoring with 29 bruising points, drained one of his two free throws with 16.2 seconds on the clock to give Miami a four-point lead.
After Oklahoma City defensive wizard Thabo Sefolosha threw away an inbounds pass, Dwyane Wade sank two more free throws to cap the victory.

“That was a very intense playoff game,” Thunder coach Scott Brooks said. “They made some plays down the stretch and we didn’t.

“We led the league in free-throw shooting percentage, but we missed some tonight and turned the ball over in the second half too many times,” he added in reference to Oklahoma City’s seven turnovers after the intermission.

Oklahoma City built a 10-point lead in the third quarter crowned by a four-point play by veteran guard Derek Fisher, who was fouled as he sank a three-point shot in boosting the Thunder to a 64-54 lead after trailing 47-46 at the half.

Miami closed the gap with the help of back-to-back fouls by the Thunder on three-point shots that gave the Heat six free throws on their way to a 15-3 run to close the third quarter as Durant sat on the bench with four fouls.

Both teams played ferocious defense down the stretch, and the Heat had to overcome eight turnovers in the fourth quarter to retain home-court advantage. The next two games in the best-of-seven series are in Miami, giving the Eastern Conference champions a chance to claim the NBA crown with a pair of home victories.

James, the NBA’s Most Valuable Player, said it was hard to get good shots as Miami’s 37.8 percent shooting attested.

“Both teams are very active defensively,” he said. “Both teams make it hard on one another to get shots.

“That’s a great team we’re going against, and defensively they have some very active players, so they kind of bring the double-team sometimes when I’m in the post or if I’m in the perimeter they kind of put two on the ball.

“I just try to take what the defense gives me, try to get into the paint.”

Miami surged to an 86-79 lead with just over two minutes to go but the Thunder hit back with six points in a row, turning Game 3 into a cliffhanger at 86-85 with 90 seconds left.

Miami’s Chris Bosh made a pair of free throws to make it a three-point game before James and Wade finished off Oklahoma City for good.