Ronaldo answers critics to down dismal Dutch in Group B

Ronaldo answers critics to down dismal Dutch in Group B 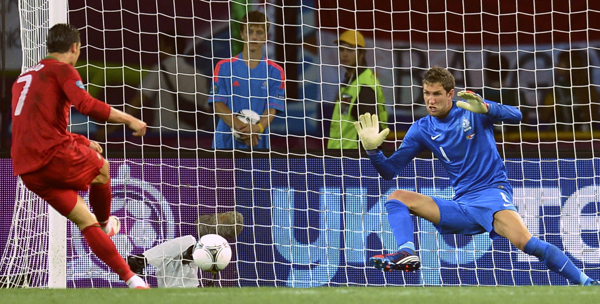 
KHARKIV, Ukraine - Cristiano Ronaldo at his thrilling best scored twice for Portugal as they reached the last eight with a 2-1 win over the Netherlands, eliminating the Dutch who ended a miserable Euro 2012 campaign without a point.

Man of the match Ronaldo delivered the tournament’s best individual display so far with goals in each half, after Rafael van der Vaart had raised Dutch hopes with a wonderful strike in the 11th minute, as they finished runners-up to Germany.

The Germans beat Denmark 2-1 in the other Group B game to finish with nine points ahead of Portugal on six, Denmark with three and the Dutch who had nothing to show for their efforts.

Portugal will now face the Czech Republic on Thursday in Warsaw while the Dutch will go home to lick their wounds.

There was no complaint about the outcome from a Netherlands team that two years ago were World Cup runner-up but this time around deserved their place among the tournament’s also-rans.

“I am responsible and therefore failed in this tournament but at this moment I am not thinking about my future,” said Netherlands coach Bert van Marwijk as the inquest began.

Like the Dutch, Ronaldo had come in for criticism but the winger’s classy touches, electrifying pace and composed finishing proving to be the difference between the two teams.

For the Netherlands, their first exit from a tournament in the group stage since winning the European title in 1988 was all they deserved after three straight defeats.

While the Netherlands, among the pretournament favorites, will search for solutions to their massive under-achievement, Portugal have little time for reflection.

The Portuguese will prepare for the knockout phase, having recovered so well from their opening defeat by Germany.

“The win was entirely deserved as was the qualification. The players had quality, hard work, belief and confidence,” said Portugal coach Paulo Bento.
“They showed this over the whole course. We proved that you can lose the first game and still qualify,” he added.

Finishing second in the toughest group is testament to the impressive progress of Bento’s team who significantly have been unchanged throughout the tournament.

The Dutch, in contrast, made three changes as Van Marwijk again searched in vain for the right formula.

His side had to deliver a two-goal victory to have a chance of squeezing into the last eight and Bundesliga top scorer Klaas-Jan Huntelaar got his first start of the tournament.

Van Marwijk’s plans looked to have been justified by a confident opening 10 minutes, with smart possession play laying the foundations for van der Vaart’s glorious opener.

Arjen Robben cut in from the right and slipped the ball to the midfielder who superbly curled a left-foot shot inside the post beyond the reach of Rui Patricio for an 11th-minute lead.

Yet the goal marked the high-tide mark for the men in orange.

Soon after, Ronaldo gave an early reminder of his threat on the counter, powering through before hitting the outside of the post with a low effort - a sign of things to come.

The Dutch were surprisingly loose with possession and it was from a poor give-away by left-back Jetro Willems that Portugal equalised in the 28th minute.
Joao Pereira threaded a ball to Ronaldo who finished in characteristic style.