Gamers who bought the hugely popular, dark-fantasy game Diablo III but were unable to play it due to overloaded networks can now have their money refunded provided they meet certain conditions, Blizzard Korea said yesterday.

The game got its global release on May 15.

The company previously insisted that it could not give refunds to players who had gained access to the game’s servers at least once but were unable to play it due to the servers being overloaded.

Now local players whose online characters were at level 40 or under as of 5 a.m. on Thursday are eligible for the full refund of 55,000 won ($47), the local office of the leading U.S. game company said.

Characters start at level one and progress through higher levels as they advance through quests, gain experience and destroy demons. The refunds can be requested via the company’s official Web site (www.diablo3.com) until midnight of July 2.

Blizzard has also changed its policy to make it possible for customers of the game, which is estimated to have sold 900,000 copies here so far, to receive refunds within 14 days of the purchase date. Those who purchase the game after Thursday will also be able to get refunds provided none of their characters exceed level 20. 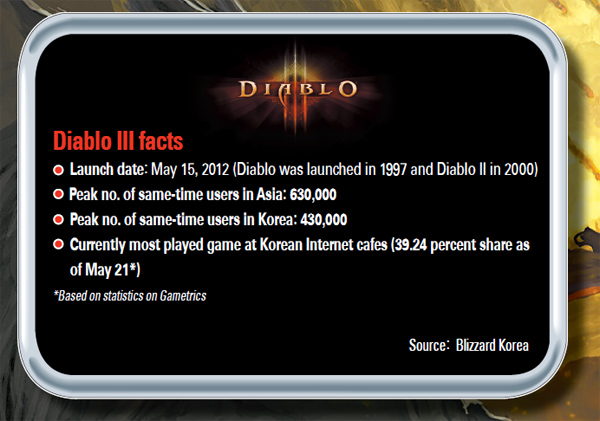 The new refund policy is unprecedented anywhere in the world.

The move comes after the company received mounting complaints from players after they were denied access to the game’s server. At its peak, the number of concurrent users hit 430,000 in Korea and 640,000 in Asia, the company said last month. Online traffic jams were known to occur on weekday evenings, weekends and public holidays.

Some players even staged an autograph-collecting campaign demanding refunds and filed an official complaint with the Fair Trade Commission and the Korea Consumer Agency.

Given the situation, the antitrust body launched an investigation last month to determine whether Blizzard had committed any unfair conduct, such as violating the local e-commerce law or failing to stipulate consumer refund conditions. The government body even raided Blizzard’s office in Cheongdam, southern Seoul.

An official at Blizzard Korea said the company considers the new rules to be the fairest way of calculating who is eligible for the refunds as the game level indicates the amount of playing time.

After the refund is processed, all of the user’s game characters will be deleted and their account deactivated.

The company doubled its server capacity earlier this month but even this was not enough to manage the chronic network overload. Blizzard Korea promised to increase the capacity by a further 35 percent, but it has not specified when.

Diablo III has been the most popular game at local Internet cafes since the second day of its release, as more than 30 percent of all players there access the Diablo III server, according to Gametrics, a portal Web site that analyzes the popularity of online games in Korea.

Meanwhile, Blizzard Korea is giving a 30-day free game voucher on Thursday to all Diablo III players for another one of its games, StarCraft II: Wings of Liberty.