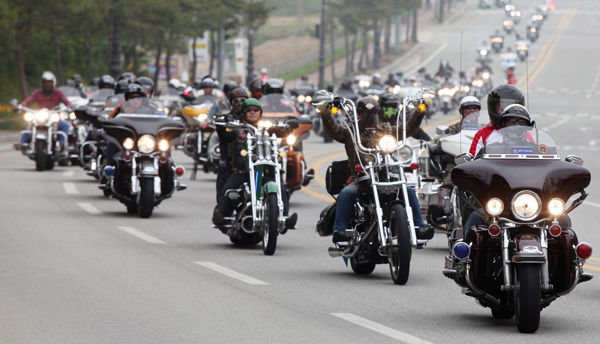 Korean Harley-Davidson owners cruise along during one of the brand’s famous H.O.G. rallies, a popular leisure activity in Korea, in this file photo. Provided by the company


Although the renewed crisis in Europe is already showing signs of influencing the local market, vendors of high-performance motorcycles are continuing to post sound growth by targeting middle- and upper-class income earners.
The price tags for motorcycles with engine capacities of 500 cc or more, which can easily reach top speeds of 200 kilometers (124 miles) per second, range from between 10 million won ($8,600) to as much as 100 million won.

Beyond a cheap commute

Kim Moon-young, 70, was one of 24 Harley-Davidson motorcycle riders cruising together along the banks of the Han river on the outskirts of Seoul one recent Saturday. Kim and the bikers were taking part in Harley-Davidson Korea’s so-called “family tour,” where the bikers travel to a destination on their motorcycle while the rest of the family either sits on the back or travels by bus.

The bikers who took part in the event ranged from 30-somethings to people in their early 70s.

Kim became the proud owner of a Harley four years ago, after spending a year convincing his wife to let him buy one.

“I rode a Suzuki when I was young,” said Kim. “But the main purpose of that ride was commuting to work.” He said he wanted to own a Harley so he could enjoy leisurely cruises that no other vehicle could offer, not even a convertible or small motorcycle.

Within a year of buying the Harley, his son-in-law had also been converted to the faith. The younger man not only purchased his own Harley, but also works for the company after ditching his job at a local credit card company. 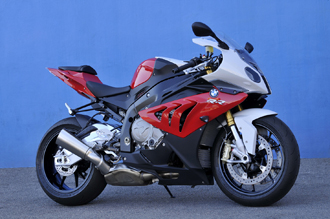 
Motorbikes are enjoying a shift in public perception. Once viewed as a cheap means of transportation, and especially one favored by Seoul’s legions of couriers, they are now increasingly seen as a tool of leisure and a gateway to an exciting new hobby and social circle.

This has helped boost the sales of high-performance bikes at a time when the general industry is in decline. According to the Korea Motorcycle Industry Association (Komia), total motorcycle sales fell 30 percent last year from 120,000 units in 2010 to around 85,000 units.

Harley-Davidson Korea hit record sales of 902 units last year, up 14 percent from 2010. In the first five months of this year, they jumped another 47 percent.

The company said it is enjoying the full benefits of the free trade agreement with the U.S. that went into effect in March. With the deal, Harley-Davidson was able to slash the price of its locally sold products by as much as 1.4 million won.

BMW Motorrad, the motorcycle arm of the German luxury automaker, sold 917 bikes last year, up nearly 60 percent from 2010. It is almost keeping pace this year, with sales climbing another 20 percent in the first five months.

The recent depreciation of the Japanese yen has also contributed to the sales of Harley and BMW motorcycles.

“Many potential customers have been switching to Harleys and BMWs, as the price of Japanese bikes has shot up on the back of the weakening Japanese yen,” said an industry insider. “Prices of Japanese vehicles are exceptionally high compared to three years ago, and although the yen has stabilized in recent months, prices are not dropping.”

Apart from Yamaha, which saw its sales triple last year, Honda saw sales of its bikes in the 500 cc or higher category halve in 2011, while Suzuki’s sales remained nearly unchanged. 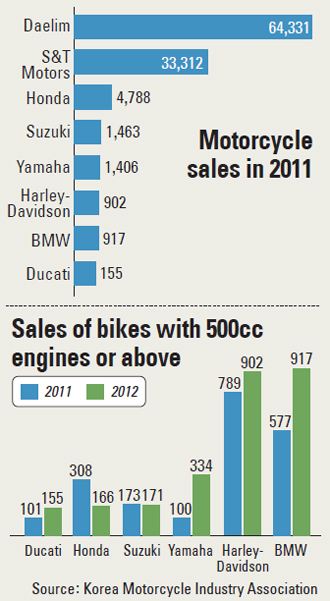 A Komia official said that sales of high-performance motorcycles are traditionally immune to economic recessions, much like luxury goods.

“People who tend to ride luxury motorcycles, or those with larger engines, tend not to be at the mercy of undulations in the economy,” said Kim Young-ho, vice chairman of Komia. “In contrast, sales of bikes with smaller engines have been negatively impacted by the slowing economy and their sales have dropped.”

Kim said most of the people who purchase models with larger engines often see them as a second car. He said that even though such models only account for a small share of the broader market, their slice of the pie is growing.

“Many buyers see them much like a second car, and they usually trade them in for a new one within one or two years,” Kim said. “We’re also finding that sales are spreading through word of mouth, with friends of people who drive high-performance bikes coming in to make inquiries and buying one for themselves.”
Yet the vice chairman said the market is limited to those who are relatively well-off.

“To own a Harley, one needs to be fairly financially secure and also have a decent amount of leisure time,” said Connick Lee, deputy general manager at Harley-Davidson Korea.

Recently, Harley-Davidson Korea and BMW Motorrad have been ramping up their marketing activities aimed at middle-age consumers ? the “family tour” promotion being a case in point ? as well as looking at ways of tapping the younger market.

Harley-Davidson Korea has been organizing family tours since 2007 and has received positive feedback from them, it said. It also has a community of women bikers and other smaller groups.

In Korea, there are already over 1,000 members of the Harley Owners Group (H.O.G.). Last weekend, BMW, which runs a Motorrad Club Korea for owners of its bikes, also held a family tour that saw bike owners ride to Gangwon.

“Having a Harley is like owning a Rolex,” said Kevin Kang, COO of Harley-Davidson Korea. “You don’t own a Rolex because of its accuracy. You buy it because of the brand image.”

Kang said the next step for the company is figuring out how to attract a younger audience.

The company said that in recent years the average age of its customers has fallen from people in their mid-to early-40s, with those in their 20s and women now also taking more of an interest. Since 2010, Harley-Davidson has been holding an exclusive tour for female bikers once a year.


What’s in store for younger buyers?

Harley-Davidson has been rolling out lighter and more speed-driven models recently to woo younger consumers, as well as a wide variety of financial programs to ease the burden of cost. Its most recent collaboration is with KT Rental. This allows interested parties to lease a Harley with the option of purchasing it at a greatly discounted price three years later.

For example, to own an XL883L worth 11 million won, the leaser can pay 200,000 won a month for three years and pay the remaining 3 million or so at the end of the contract.

The company said this new program, just three months old, has already started to attract the interest of women in their 20s and 30s.

BMW Motorrad is offering similar deals for some of its models, including the F800 R and F800 ST. Dubbed “Easy Rider,” these allow riders to pay a lump sum equivalent to half the model’s cost, then pay the remainder in interest-free installments of around 110,000 won for the next 36 months.

Japanese motorcycles are also getting in on the action. In February, Yamaha launched its new 530 cc TMAX, which can generate up to 46 horsepower and a maximum speed of 180 kilometers per hour. The TMAX series is one of the most popular in Korea.

One month later, Honda launched its Integra ? known for its exceptional fuel efficiency and mobility ? and Crosstour models.