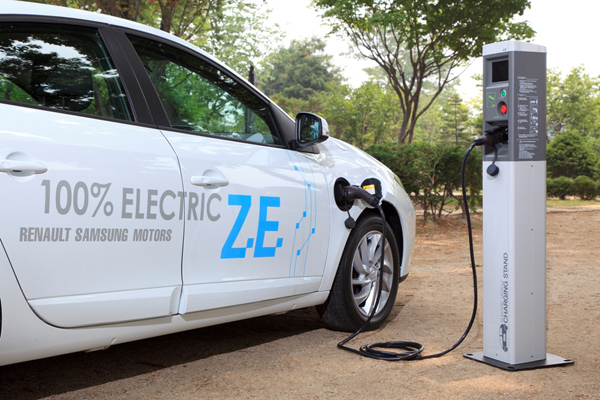 Renault Samsung Motors’ electric car SM3 Z.E., which is also known as Fluence Z.E. in France, is being charged. Provided by the company

The automaker said the LG Chem batteries will be equipped in electric cars mass-produced in Busan beginning in the latter half of 2013.

Battery costs account for one-third of the SM3 Z.E. price tag. The company believes that if batteries are leased and thereby excluded from the list price, the vehicle will sell for between 20 million won ($17,300) and 30 million won.

Considering the current rate for gasoline would reach 200,000 won to 250,000 won per month for the same miles, battery lease costs will be a cheaper alternative, the company said.

Renault Samsung said it will also localize components including batteries so that the production costs can be lowered.

The company plans to supply 500 units of SM3 Z.E. exclusively to government institutions this year. The 500 cars will be manufactured in Turkey by Renault SA and equipped with batteries made by Automotive Energy Supply Corp. (AESC), a joint venture between NEC and Nissan.

Electric cars have many benefits such as low maintenance costs and zero emissions, but their prices pose a large obstacle to market success. The company said the Busan-manufactured models will have several more functions including one that prevents cars from skidding on slopes.

Renault Samsung has signed partnerships with local companies to prepare for the launch of electric cars next year. It agreed in March to cooperate with LSIS to establish charging stations in the country.

Renault Samsung is trying to overcome poor sales in gasoline cars by launching electric cars. It said the SM3 Z.E. can get from 0-50 kilometers an hour in just 4.1 seconds, faster than the gas version.