DUP leaders turn from Ahn as date of election nears

DUP leaders turn from Ahn as date of election nears 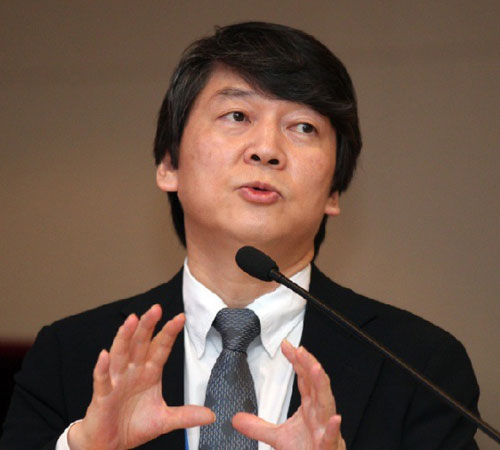 With only months left before the presidential election, political heavyweights of the Democratic United Party have changed their view toward liberal Ahn Cheol-soo from friend to foe.

Ahn, a software mogul-turned-scholar, was once considered one of the strongest allies of the liberal opposition party as he had made clear his political standing against the conservative ruling Saenuri Party.

Ahn’s political power was proven during the Seoul mayoral by-election in October last year as his last-minute endorsement of Park Won-soon, who ran as an independent candidate with the Democrats’ backing, was credited largely for the Saenuri Party’s defeat.

Over the past months, Ahn rose quickly as a political star, although he has yet to announce his presidential bid.

South Gyeongsang Gov. Kim Du-kwan, a rising presidential contender of the DUP, told the JoongAng Ilbo last week in an interview that it would be “extremely dangerous” for a political independent like Ahn to run the country.

Moon Jae-in, former chief of staff of the Roh Moo-hyun Blue House, also indicated last week that he would be a stronger candidate than Ahn. Moon stressed that his advantage comes from having an affiliation with the DUP, while Ahn has no backing from a political party.

Sohn Hak-kyu, former Gyeonggi governor who served the largest opposition party twice as chairman, also downplayed the strength of Ahn. In his interview with the JoongAng Ilbo, Sohn said Ahn is nothing but an empty image.

While Ahn was seen as an obstacle to overcome by the presidential contenders, the DUP leadership tried to recruit him for the party’s primary, rather than consolidating the candidacy in the last minute. The worst nightmare of the DUP would be failing to field its own candidate in the presidential election - a situation that it had already experienced in the Seoul mayoral by-election.

“It’s already a bit too late for Ahn,” Lee said. “Because verification of a candidate’s qualifications is not something that can be easily done with words, the quicker will be the better for him.”

Lee showed concerns that the popularity of presidential contenders in his party was too low and none of them have the potential of single-handedly beating Saenuri front-runner Park.

“Competitiveness of each candidate is important, but we can only win when all opposition sides are united,” he said.

Lee stressed that it would be preferable for all liberal candidates to run in a single primary.