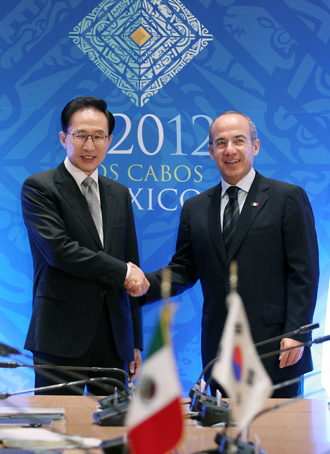 Korea and Mexico launched free trade talks in 2007, but the negotiations have been stalled since the second round in 2008 due in part to concerns in Mexico that such a pact could widen its trade deficit with Korea.

The two leaders reached the agreement during summit talks held after Lee arrived in the Mexican resort city here for a summit of the Group of 20 major economies, set for Monday and Tuesday.

Lee arrived in Mexico on Sunday to participate in the summit expected to focus on the worsening euro zone debt crisis amid worries it could spread beyond the single-currency bloc.

The summit comes about a week after Spain announced plans to seek a bailout, the fourth nation in the 17-member euro zone to do so, and a day after Greece held a crucial election seen as a vote on whether it will leave or remain in the euro.

Official results showed that the pro-euro New Democracy Party won the election, laying to rest concerns about the much-feared possibility of Greece leaving the zone, which would deal a critical blow not only to Europe but also to the global economy as well.

As former and incumbent G20 hosts, Lee and Calderon agreed to work closely together to ensure the premier economic forum contributes to the global economic recovery and growth, the presidential office said.

They also expressed satisfaction in the way relations between the two countries have moved forward, such as the bilateral trade volume reaching $12 billion last year.

At the summit, Lee had planned to discuss with other world leaders how to tackle the euro zone debt crisis, coordination of macroeconomic policies, strengthening the international financial system and other challenges.

“A main point of discussions will be resolving the euro zone crisis,” a senior presidential official said in a briefing to preview the summit. “Europe’s roles are important in resolving the crisis, but what is also important is policy coordination among G20 nations.”

The Group of 20 major economies forum, which was launched in late 2008 to tackle the financial turmoil that was then sweeping the globe, boils down to how to stabilize the global economy, which is a crucial issue to open economies like Korea, the official said.

Ahead of the leaders’ summit, Lee also planned to attend a conference of about 100 top global business leaders and deliver a keynote speech about the roles governments and businesses should play to help overcome the global financial crisis and promote sustainable development, officials said.

Mexico is the first leg of Lee’s four-nation trip to Latin America that will also take him to Brazil for a UN conference on sustainable development, known as the Rio+20 summit, as well as Chile and Colombia later this week for bilateral visits.

The UN conference in Rio de Janeiro is massive in scale, set to bring together a total of 50,000 people from around the world, including government representatives from 186 countries, especially 78 heads of state.

During a keynote speech at the conference, Lee plans to make a pitch for “green growth” as a solution to global challenges, such as the economic crisis, the widening gap between rich and poor, climate change, and the decline in biodiversity, officials said.

Lee believes the strategy will provide Korea with fresh growth engines for its economy and help the country - one of the world’s biggest greenhouse gas emitters - reduce the emission of carbon dioxide and other heat-trapping gases amid growing calls to curb global warming.

Under the drive, Korea established the think tank Global Green Growth Institute (GGGI) in 2010 to help develop strategies to promote the environment-friendly cause. GGGI has since opened a series of overseas offices, beginning with one in Denmark last year.

On the sidelines of the Rio+20 summit, representatives from Korea and 14 other countries will sign a treaty that turns GGGI into an official international organization, with Lee and about 10 heads of state attending the signing ceremony.

GGGI will become an international organization after the signatories ratify the treaty.

During a three-day visit to Chile, Lee will hold a summit with President Sebastian Pinera on Friday to talk mainly about expanding economic cooperation, especially in such areas as resources development, infrastructure construction, renewable energy and the defense industry.

The government of Santiago also plans to award Lee honorary citizenship in recognition of his contributions to strengthening ties between Seoul and the Chilean capital when Lee served as Seoul mayor in 2002-6.

Chile, which is rich in copper and other natural resources, is the first foreign nation that signed a free trade agreement with Korea.

This year marks the 50th anniversary of diplomatic relations between the two countries.