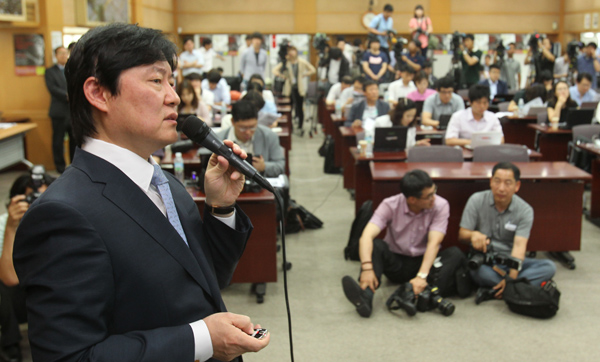 
As part of the latest wrangling between the government and a group of doctors, the Korean Medical Association strongly refuted the government’s argument yesterday, saying that enforcing a new payment system based on diagnosis-related groups, or DRG, will “deteriorate the quality of medical treatments.”

“The Korean government is lying to its people and is telling them the positive effects of the new fee system,” said Roh Hwan-kyu, chairman of the association, yesterday, during a press briefing held at its headquarters in Ichon-dong, central Seoul.

“The truth is that the new DRG system will uniformly put a cap on medical fees, which will eventually lower the quality of medical treatments.”

Last month, the government announced that it will enforce a mandatory system in which medical fees for seven different treatments, including cataract surgeries and caesarean sections, at hospitals and clinics will be fixed based on procedures from July.

The Ministry of Health and Welfare believes the new system will lower medical fees by an average of 21 percent for patients because doctors will refrain from giving unnecessary treatments.

The ministry also said the flat rate system will reduce the government’s spending on national health insurance, which has been growing in recent years due to the aging society.

Illnesses and disorders that are subject to fixed rates include appendectomies, hernia operations, C-sections and cataract surgeries.

“The government is trying to appeal to people by fabricating research studies as if the quality of medical treatment deteriorates if more money is spent on hospital expenses,” Roh said.

“But that’s not true. If the DRG system is applied to even more medical treatments from the currently planned seven illnesses and disorders, people who will be affected the most will be the elderly who spend relatively more money on health.”

The chairman also said yesterday that the organization will conduct a nationwide survey jointly with the government on what people in general think of the new system.

The government said it will take tough legal action against doctors planning on halting surgeries in the first week of July as part of a strike against the new fee system.