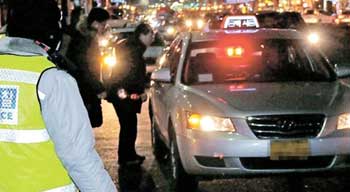 In response to a planned, nationwide taxi strike, the government announced it would extend bus and subway operation hours tomorrow.

Four associations of taxi drivers in the country have declared to go on a day-long strike tomorrow, demanding reduced fuel prices and raised fares, which are fixed by the government. They also plan to stage a large-scale rally in Seoul Plaza, central Seoul.

This would mark the first time that taxi drivers have launched a nationwide strike.
Still, the association determined that drivers in Yeosu, South Jeolla, won’t join the strike, considering visitors of the Yeosu Expo.

The Ministry of Land, Transport, and Maritime Affairs yesterday said they will launch a package of contingency measures to prevent massive traffic chaos.

Under the plan, starting from Wednesday midnight until early Thursday, subway operation will be extended by one hour in Seoul and Busan and 30 minutes in Daegu. Trains will run more frequently: Seoul will have 225 more operations; Gyeonggi will have 44 additionally; and Busan will have 128 more.

Buses ? both normal-sized and?minibuses ? will also have longer operation hours, starting one hour earlier and finishing one hour later than usual.

Taxi drivers have constantly demanded five things to the government so far: designating taxis as public transportation in order to receive state subsidies; stabilizing the price of liquefied petroleum gas (LPG), which most taxi drivers use because of the government subsidies given to LPG users; offering subsidies to drivers using other fuels, such as diesel fuel or natural gas; raising the base fare by 500 won (43 cents); and providing compensation in response to the government’s policy to reduce the number of taxies.

But the government has clarified that they can’t meet any of the five demands. Especially the policymakers say that the Seoul city government is adhering to its position to refuse the base-fare raise within this year.

Roughly 250,000 taxies were in operation as of May, and about 90,000 of them are hired by the four private taxi companies that ordered their drivers to strike.

Still, it is unclear if the rest of them, about 160,000 drivers who run their own taxies, will join the strike.