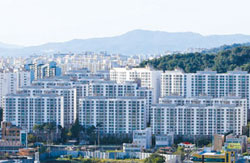 A small business owner surnamed Shin, 62, is finding his debts are mounting beyond his control. Already saddled with a 150 million won ($129,700) mortgage, he put his apartment up as collateral at the end of last year so he could borrow 50 million won from a bank to pay for his youngest daughter’s wedding.

Now he is finding himself squeezed by a perfect storm of financial binds: His business is suffering as exports have declined due to the impact of the fiscal crisis in the euro zone; banks are tightening their lines of credit, making it harder to get loans; and, adding insult to injury, living costs are getting more expensive as inflation remains high.

“As banks are now more reluctant to approve loans, I had no choice but to extend my mortgage,” Shin said.

“I’ve even put my apartment up for sale as the interest from all my loans is becoming a major headache, but so far no takers.”

The real estate market has been stagnating for years, but banks are enjoying brisk business for mortgages and related loans as the local market feels the pinch of the decelerating global economy and Korea’s graying society groans under the weight of a growing number of retirees.

In Korea, many homeowners are now using their property as collateral to access loans simply to do their weekly food shopping.

According to the Ministry of Land, Transport and Maritime Affairs, in the first quarter a total of 100,511 apartments were sold.

This is roughly one-third less than the number traded in the last three months of 2010.

“In the past, people tended to take out mortgages to buy a new house or purchase a larger apartment,” said an employee at the Bank of Korea.

“But recently, people are taking out loans by using their property as collateral.”

The study by the central bank showed that, in the first three months of this year, mortgages from commercial banks amounted to nearly 307 trillion won.

This marks an 8 percent increase from the 284 trillion won posted in the fourth quarter of 2010.

This comes in stark contrast to the shrinking growth of non-mortgage loans during the same period. As a result, mortgages now account for 67.7 percent of all household loans, the biggest share in almost a decade.

“Many people are rushing to take out mortgages with relatively low interest rates because they are easy to get approved,” said Kim Woo-jin, a researcher at the Korea Institute of Finance.

“Moreover, retiring baby boomers are taking out loans and putting up their properties as collateral as they try to secure funds to start their own businesses,” the researcher added.

Some people are even using their long-term housing rent as collateral to take out more loans.

At the end of last month, such loans taken out from the nation’s four major commercial banks - Woori, KB Kookmin, Shinhan and Hana - amounted to nearly 2 trillion won.

This is three times higher than the amount at the end of 2010.

“The fact that many more loans are being taken out to buy daily essentials indicates that the debtors’ ability to repay their original debts has fallen,” said Prof. Park Chang-gyun, who teaches economics at Chung-Ang University.

“As the quality of debt deteriorates, the situation starts to look like a ticking time bomb.”

This creates an environment where debtors can get sucked into a vicious cycle that sees them take out a secondary loan to repay the interest and principal on their mortgage as they watch the value of their apartment - which they cannot sell - fall.

“If the value of these properties that have been put up as collateral continues to fall, it could badly affect the mortgage loan sector,” said Prof. Jun Sung-in, who teaches economics at Hongik University.

“The worst-case scenario is that this causes banks to become insolvent.”

Overdue payments on mortgages have also been rising. The rate stood at 0.61 percent at the end of last year but rose to nearly 0.8 percent as of the end of April, according to the financial regulator.

Moody’s expressed concern about the alarming expansion of household loans, especially the increase of those who borrow to pay for their living expanses.

“The low unemployment rate may not provide a cushion against loan performance deterioration,” Moody’s wrote in a report.