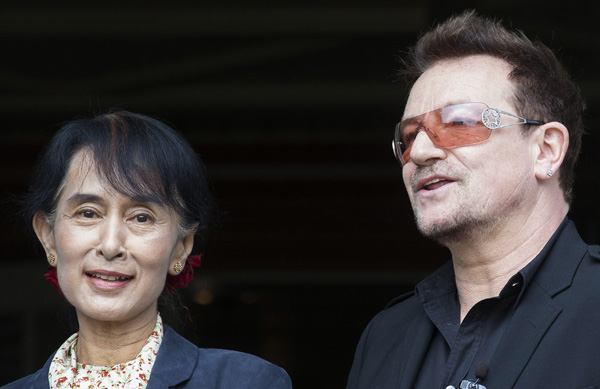 DUBLIN - Aung San Suu Kyi and Bono joined forces Monday as the Myanmar democracy activist’s European tour moved from the home of the Nobel Peace Prize to the land of U2.

The pair spent more than an hour answering questions at an Oslo conference of peace mediators at the end of Suu Kyi’s four-day visit to Norway. Then they jetted together to the Irish capital, Dublin, for an evening concert in her honor.

Irish Foreign Minister Eamon Gilmore and a trio of children, two of them Burmese nationals, offered Suu Kyi flowers as she arrived at Dublin Airport. After meeting Irish President Michael D. Higgins, she arrived at a riverside theater to thunderous cheers and applause, with Bono and Nobel laureate poet Seamus Heaney walking alongside her down the red carpet.

Inside, Amnesty International organized a three-hour show of songs, poems and speeches in her honor, featuring top Irish stars and set against a backdrop of a wall of opened birdcages symbolizing her freedom from house arrest in 2010.

Redgrave and Bono then presented Suu Kyi with another of her long-postponed awards, Amnesty’s Ambassador of Conscience. Bono had announced the award at a Dublin U2 concert in 2009 during a worldwide concert tour that highlighted demands for her freedom.

“Everybody’s here to sing for you tonight, but it’s your song that everybody wants to hear,” Bono said as he invited Suu Kyi to the stage to a two-minute standing ovation.

“This has come as a surprise to me, and a very moving one,” said Suu Kyi, who got laughs by observing that the British used to consider the Burmese “the Irish of the east” - because they never gave the British any peace, both liked a drink and were very superstitious.

Bono, who also wrote the 2000 hit “Walk On” in praise of Suu Kyi’s long exile from her family, had never met her before. He admitted, during his first news conference alongside Suu Kyi in Oslo, that he found her a wee bit intimidating.

“I’m star-struck .?.?. but I’m managing to get over it,” said the 52-year-old Bono, who donned his trademark yellow-tinted wraparound glasses and high-heeled boots.

Suu Kyi, in turn, said Bono had hit the right note with “Walk On,” which was written from the point of view of her husband Michael Aris. Myanmar’s military rulers refused to let him see his wife from 1995 to his death from cancer in 1999.