Searching for the killer takes its toll off the set

Searching for the killer takes its toll off the set 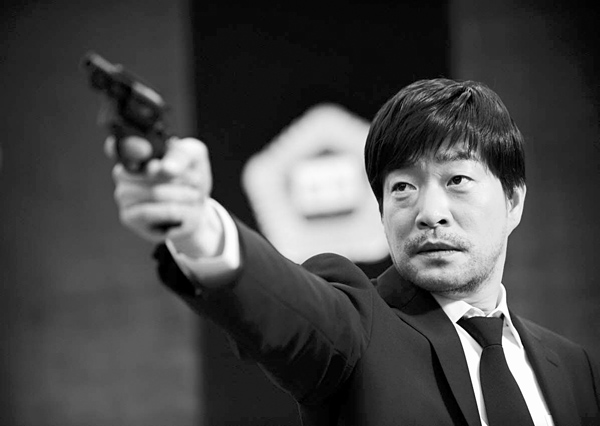 
Detective Baek Hong-seok lived with his wife and 15-year-old daughter in a rundown house with a leaking roof. He dreamed of saving up enough money to purchase his own property and provide a comfortable home for his family before his daughter started high school.

But it all changed when the unthinkable happened. Hong-seok’s daughter died suddenly in a strange car accident, the story given by the police dissonant with the facts. His wife, suffocated by the weight of the tragedy, committed suicide.

The detective refused to accept chance as the reason for his daughter’s death and began looking into the circumstances surrounding the supposed accident. He set all inhibitions aside in order to uncover the truth and in the process discovered a conspiracy that runs deeper than he could have ever imagined.

Hong-seok, played by Son Hyun-joo, is the protagonist of the popular SBS drama “The Chaser.” The series’ plot is riveting, but it is the high-quality acting that has separated the program from the K-drama pack.

Son has been featured in television dramas for 21 years, including starring roles in KBS2’s “My Rosy Life” (2005) and “The Sons of Sol Pharmacy House” (2009), and has enthralled audiences as an indecisive bachelor and a cold-hearted husband.

But his heavy role as Hong-seok has taken its toll.

“Right now I am not really capable of going back and forth from smiling to being gloomy,” Son said.

The drama veteran has been easy to find on the small screen for the past two decades, but he is surprisingly media-shy for such a well-known figure.

He says he would rather focus his attention on improving his acting skills, often dubbed near perfect by drama critics.

He did agree to sit down with the JoongAng Ilbo for a rare glimpse into the actor’s world off the set. He is currently shooting “The Chaser,” which will wrap up on July 17.

Q. In the drama, the death of your character’s daughter is tied to a grand conspiracy, his wife commits suicide and he seems as though he’ll do anything, from kill to break out of prison, for revenge. What would you do if all these happened in real life?

A. I think I would get extremely irritated and suffocate from the oppression. I was only able to pull off a prison break for the show, but in reality, I don’t think I would able to accomplish that. I remember the line spoken by actor Kim Sang-joong (playing lawmaker Kang Dong-yoon) during filming.

When I tell Kang that I will never forgive him for killing my daughter, he says, “Forgiveness is what a person with power can do and what a person like you can never achieve.”

When I heard Kang’s words, it felt like my heart was tearing in half.

You seem to be totally captivated by your role.

Right now I am not really capable of going back and forth from smiling to being gloomy, and so I have to keep this dark expression for my character.

The competition among actors for the best performance seems to be ruthless.

Honestly, to say that there is an acting competition seems so immature. If the actors start to compete amongst themselves, there would be no light at the end of the tunnel for this drama. The thing is that we do have all these seasoned actors and actresses without idol singers who also act.

It has been a long time since an authentic and traditional drama has come out, and that is why I think it is getting such critical acclaim.

There are rumors that everyone in the cast gets the take right in a couple of tries. Is it true that no one really makes mistakes on the set?

No, we do make mistakes. The netizens on the Internet say that we seem to be out of our minds when we are acting, and this is true. We are actually becoming crazy for this drama, and we are doing everything we can to provide a near-perfect performance for our audience.

The scene in which you break down while holding onto the spoons of your wife and daughter at the dinner table was impressive.

This is the first time I have played a role with a lost child, and I think I was naturally able to slip into my character as I am a father in real life. I met my on-screen daughter, Soo-jung, in April, and I kept telling myself that she was my real daughter in order to befriend her as quickly as possible.

I have a daughter who is in middle school, and like other fathers, I am worried about how she will grow up in our society that is so unsafe for women these days.

It really saddens me when I occasionally wonder what will happen to her if I am no longer by her side. I am not able to see her that often because I am so busy, and she comes home late from private academy classes. It distresses me to see her so exhausted in the mornings.

There is tough competition among the dramas airing right now.

There are so many dramas. “Big” has a handsome actor, and compared to Gong Yoo, we are not quite as attractive. That is why we continue to perform action scenes. [Laughs]