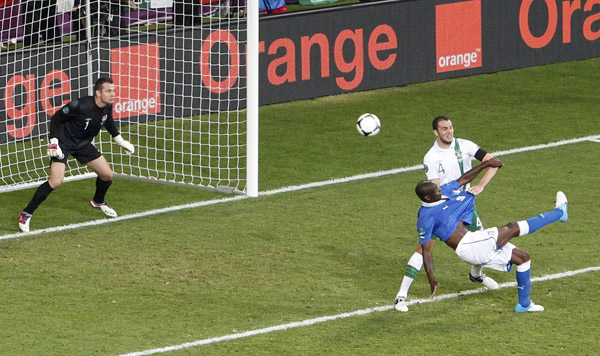 Italy’s Mario Balotelli scores during the Euro 2012 championship Group C match between Italy and the Republic of Ireland in Poznan, Poland, on Monday. [AP/YONHAP]


POZNAN, Poland - Blowing kisses to the crowd with a joyous grin on his face, it was a different Antonio Cassano who walked off the pitch this time.

Cassano, who wept uncontrollably after Italy was eliminated from the 2004 European Championship, scored the decisive goal Monday when Italy beat Ireland 2-0 Monday to reach the Euro 2012 quarterfinals.

“We Italians are used to suffering, but we always give our best,” said Cassano, who nearly lost his life with stroke-like symptoms seven months ago and then required minor heart surgery. “The victory was something we struggled for, but the most important thing was to get through the group.’’

With Italy needing a win to stand a chance of advancing, Cassano scored the first goal. He headed in with his back to the goal by the near post following a corner kick in the 35th minute on a warm and muggy night at Municipal Stadium.

Substitute Mario Balotelli doubled the lead in the 90th, a minute after Ireland was reduced to 10 men when Keith Andrews picked up his second yellow card.

Still, Italy had to wait a few moments after the final whistle to celebrate, before receiving word that Spain beat Croatia 1-0 in the other Group C match.

The victory ended a five-match winless streak for Italy, which began the tournament with 1-1 draws against Spain and Croatia following three friendly losses.

“I couldn’t wait for them to blow the whistle in the other game and for it to finish,” Cassano said.

Italy had been worried about a 2-2 draw between Spain and Croatia, which would have eliminated the Azzurri no matter if they beat Ireland. That’s exactly what happened at Euro 2004, when Italy beat Bulgaria in its final group match thanks to Cassano’s winning goal. But Italy was sent home when Denmark and Sweden finished 2-2.

He cried that night, but eight years later he helped send Italy to the next round despite concerns that he might not even make the squad. In October, Cassano fell ill with stroke-like symptoms on AC Milan’s team plane. He was out for five months and has said repeatedly that he thought he might never recover.

Cassano was also left out of the Azzurri’s last two World Cup squads by former coach Marcello Lippi, who worried about Cassano’s temper. There’s never been any question over Cassano’s talent, though.

Ireland goalkeeper Shay Given got his hand to Cassano’s header, but couldn’t prevent it from going in.

Balotelli’s goal was a work of art, with the 21-year-old striker acrobatically wrapping his shot around defender John O’Shea in midair, as he met a corner kick from Alessandro Diamanti.

Italy will meet the Group D winner Sunday in Kiev, Ukraine - with France, England and co-host Ukraine among the possible opponents.

“No difference to us [who we play]. We have already played Spain, who are reigning world and European champions,” Italy coach Cesare Prandelli said. “If we play well, we can take on anyone.”

Spain won the group with seven points, Italy finished second with five, Croatia was next with four and Ireland - which was already eliminated - exited its first major tournament in 10 years with none.

“We played well tonight, but without creating too many chances either,” Ireland forward Robbie Keane said. “We’re disappointed not to get anything out of the group, but we’ve been beaten by better teams.”

Italy goalkeeper Gianluigi Buffon did well to control a bouncing effort from Andrews on the hour mark, and the midfielder came even closer with a free kick that Buffon stopped with a diving save in the 79th.