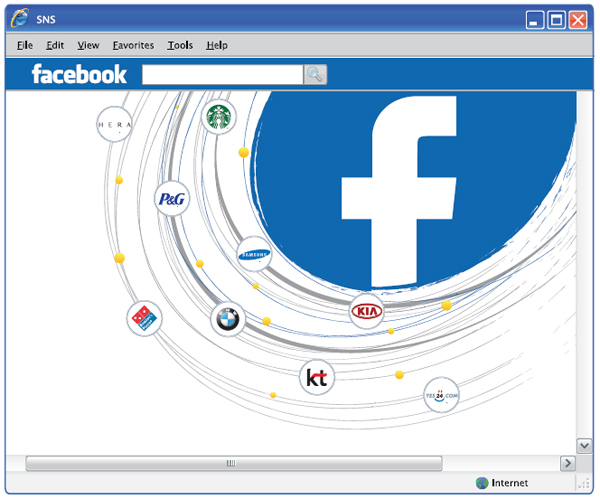 Facebook’s explosive popularity in Korea is seeing it shape up as a testing ground for corporate marketing as foreign multinationals and local corporations increasingly turn to the digital domain to raise their brand awareness among finicky local consumers.

In roughly the same period, the number of corporate accounts has doubled to 800, covering industries as diverse as cosmetics and online bookstores. The five most popular corporate pages on the site here are Samsung Group, Domino’s Pizza, KT, SK Telecom and Hera.

A source close to Facebook gave two reasons for the recent boom in local individual users: First, fans can get closer to their favorite celebrities who now post directly on their Facebook accounts; second, they can reconnect with foreign friends made overseas while studying or traveling.

“Nowadays, many Koreans see Facebook as the best way to get up-to-date news on their favorite celebrities. In the past, the stars’ agencies would provide the updates, but now, the artists or actors do it themselves. For example, Maroon 5 recently debuted its new song on its Facebook site,” she said.

“This has caused the number of Facebook users here to shoot up dramatically, which has driven interest from corporations, who now want to use it as a marketing tool. People also know they can get freebies by opening such accounts.”

Companies entice potential buyers with behind-the-scenes pictures and by giving away free sample products, among other means. The key, industry insiders say, is focusing on interactivity to firm up brand loyalty.

Hera, a high-end cosmetics brand owned by AmorePacific, clearly illustrates this new trend. When it launched its UV Mist Cushion foundation in April, it unveiled the product to its Facebook fans - who now number close to 120,000 - first.

Consumers can obtain free sample products from boutiques at department stores simply by flashing their smartphones to staff to prove they are Facebook friends with the brand. To further cement ties, the company invited a number of fans who reviewed the product online to a beauty seminar with seven professional makeup artists.

“Facebook is the perfect platform to interact with both local and international consumers,” said Park Sung-nim, Hera’s brand manager. “We only run a Korean-language page at the moment, but we are now getting messages [on it] in English from consumers in Singapore and Thailand who are interested in our products.”

Park said it is important for companies to interact with consumers online rather than just seeing this as a one-way communication channel to proselytize about the virtues of their products.

“People would walk away if companies’ Facebook pages are solely dedicated to promoting their products, without interacting with consumers,” she said. “We post informative video clips about makeup and staying in shape. Consumers share with us their best makeup tips by videotaping themselves.”

When Procter & Gamble released its fabric softener Downy in Korea in March, it asked its Facebook fans to send in their photos of the product, and in return, it sent them all 200-milliliter (6.8-fluid-ounce) samples.

“Our entire focus on Facebook marketing is raising brand awareness,” said Jeong Woo-jong, brand manager of Downy. “It isn’t about making more money. It’s about building intimacy between consumers and companies. Although it’s too early to say whether the Facebook page has contributed to boosting our sales, we’re certain it will help us build brand loyalty, which we believe will definitely contribute to future sales.”

Online bookstore Yes24 gives away free books every day to its Facebook friends who post messages on its fan site at 2:04 p.m. It also gives its online fans priority when assigning places to readers’ meetings with bestselling authors and organizes interactive charity drives.

“In the past, we donated briquettes to people in need by having our Facebook users click the ‘like’ button on one of our pages devoted to charitable programs,” said Lee Seon-jae, a marketing director at Yes24.

While the Korean operations of BMW and General Motors actively connect with Korean consumers, local automaker Kia - an official sponsor of the ongoing Euro 2012 football tournament - is even more aggressive in reaching out to overseas consumers. Its global fan page has 1.9 million fans worldwide.

“Social media literally gives us 24-hours-a-day access to potential customers, regardless of the time difference, which is an obvious advantage,” said Kang Eun-hee, a publicist at Kia. “It’s the quickest way to react to, and reflect on, consumers’ ideas and feedback.”

Whether Facebook marketing directly contributes to rising sales and affects the purchasing behavior of consumers remains an open debate, but a study released by research firm comScore last week suggests that Facebook marketing and ads prompt more users to buy.

It showed that Starbucks’ customers and their friends visited the coffee chain 38 percent more frequently in the four weeks after they had been exposed to its Facebook page than those who hadn’t.

More tellingly, fans of Amazon’s Facebook page spend twice as much money on the site as other Internet users, the research firm added.

Lee Dong-hoon, a senior researcher at the Samsung Economic Research Institute, said companies should maximize their social marketing tactics to connect with people on a one-to-one basis.

“Thanks to the birth and advancement of social networking services, consumers these days sometimes wage a war on the Web on behalf of companies that they like. They can also directly publish their thoughts about the companies and their products,” Lee said. “These consumers should be seen as a golden idea bank for companies, which can utilize them as both product developers and publicists.”

But to make this happen, market observers said the people in charge of the Facebook fan pages and other SNS media should be more media savvy and keep their messages short and sweet, if not idiot proof.

“Long and hard-to-understand sentences fail to capture customers’ interest,” said Park of Hera. “Keep sentences succinct and avoid dry words. When customers feel they really want to try a product or an event after reading a few sentences, that’s ideal.”

Jeong of P&G Korea said that engaging Facebook fans with trivial day-to-day discussions is also a hugely undervalued marketing tool as it creates stronger bonds on an emotional level.

“When I go to a restaurant with a beautiful interior and get my food, the first thing I do is take some pictures and post them on Facebook with messages,” he said. “The posting of such trivial tidbits is one of the best emotional marketing tools available.”