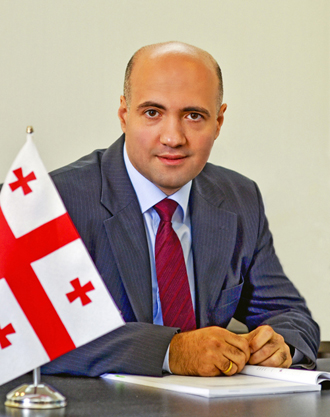 Georgia’s Finance Minister Dimitri Gvindadze said his country has not been hit hard by the euro crisis and potential investors can easily understand that by looking at its growth.

“If you look at our growth dynamics, we are doing pretty well. We ended up with a 7 percent growth last year and our baseline growth rate is 6 percent,” said Gvindadze, who visited Seoul last week to attend a forum to promote business investments in Georgia.

Georgia had a GDP per capita of $5,491 as of 2011, but it is also one of fastest growing economies: Yearly GDP growths hovered around 10 percent from 2003 through 2007, before it was affected by the global financial crisis and the war with Russia over the breakaway region of South Ossetia in 2008.

Gvindadze highlighted the safety of making investments in Georgia, saying the country has a strong national balance sheet.

Here are excerpts of his interview with the Korea JoongAng Daily:

Q. What aspects of Georgia should global investors look at?

A. There is a global investor community out there, there are many real-time investors and they look for safe destinations, for countries with a strong sovereign balance sheet in the first place. So in my view, Georgia comes across as exactly that kind of country. The economic strengths of Georgia have got dynamics of their own.

What are benefits of making investments in Georgia?

The Georgian government reduced 21 kinds of taxes to six. Although the government has fewer sources of revenue, the tax reduction helped the country tackle the underground economy and corruption.

Georgia is liberal in terms of growth of the private sector and we believe in small government. It has one of lowest tax burdens in the world. All taxes are flat and very low, and taxation is limited to only 30 percent of the economy. We feel that our tax base has increased significantly and we will keep decreasing tax rates.


How are relations between Korea and Georgia?

The country opened an embassy in Seoul this year in order to forge closer economic relations with Korea. There is a fast development of cooperation between Korea and Georgia. We have high expectations of establishing close business-to-business relations.

Korean companies are quickly positioning themselves globally in terms of investments. I believe Georgia can become a great platform for Korean companies to trade in Europe and do business globally.

Construction of hydropower plants is a crucial industrial sector for Georgia, and Korean companies have shown special interest in involvement in huge projects.

Both for Korea and Georgia these are basically win-win situations, because Georgia uses roughly 18 percent of its overall energy generation capacity, which means there is huge, untapped potential to explore.

There are 15 hydropower plants being constructed by the private sector, but these are medium-sized power plants. With our Korean counterparts, we are discussing bigger schemes that would be worth $600 million to $800 million each.

[Korea Electric Power Corporation and SK E&C signed an MOU with the Georgian government to build an $800 million hydropower plant with a capacity of 4,500 megawatts in Namakhvani in 2009. They have completed a feasibility test, but not much work has progressed yet.

[There are discussions going on with other companies, the minister said, but he declined to name them all.]

What other industrial sectors are important?

The tourism sector. There are 3.5 million foreign visitors in Georgia. That is a very significant number for a country with a 4.5 million population. This figure is forecast to grow up to five million by 2015. It is also about the whole hospitality industry and boosting the whole economy. Increasing tourists will also boost demand for local agricultural products. The next area is agriculture. 2011 was the year when the agricultural sector contributed to the 7 percent GDP growth.

How do you view Korea?

Economic cooperation between Korea and Georgia has been at a low level, but Georgia is trying to expand the country’s ties with Korea, which is one of its role models in terms of development.

Korea is a key country in Asia and has achieved quite a lot in recent years, a huge economic leapfrog. It is becoming increasingly international in terms of its corporate outreach. These companies to a large extent have already shaped the corporate dynamics in the region, but I am sure that the future will be broader than that. These are the companies that will most likely become global players.

Korea is, politically and geopolitically speaking, one of the very constructive players on the global and Asian chessboard.

There is huge potential to explore in terms of trade and investment. Georgia will be a good investment destination for Korean companies.

The pace of Korea’s development is important. I don’t think it’s possible to simply copy and paste it, but yes, we are looking at Korea as an inspirational model.

Georgia is very open to sign free trade agreements with all countries, including Korea. We don’t believe in trade restrictions.

We signed an FTA with Turkey in 2008 and are in talks with the EU to have a similar one by 2013. The presidents of the United States and Georgia discussed the possibility of having an FTA deal in January. However, with Korea, formal talks haven’t started yet.

How do you forecast Georgia’s future relations with Korea?

In a closed-door meeting with Korea’s First Vice Minister Shin Je-yoon of the Ministry of Strategy and Finance, we talked about economic cooperation including the Economic Development Cooperation Fund. Shin confirmed the eligibility of Georgia for the fund.