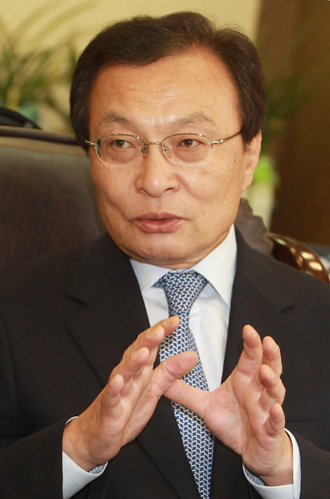 Lee Hae-chan, chairman of the Democratic United Party, in an interview with the JoongAng Ilbo yesterday at his office in Yeongdeungpo District, southwestern Seoul. By Kim Hyung-soo

Lee Hae-chan, chairman of the Democratic United Party, urged Ahn Cheol-soo to decide whether to join the largest opposition party by July 20, expressing hope that the independent software mogul-turned-scholar will compete against political heavyweights in the party’s primary.

Lee met with the JoongAng Ilbo yesterday at the party’s headquarters in his first media interview as its new chairman. Representative Lee, a key loyalist of former President Roh Moo-hyun, was elected June 9 to oversee the party’s campaign for the December presidential election.

“It is desirable for Ahn to join our party and run in the primary,” Lee said. “But if he fails to do so [by July 20], we have no choice but to have a two-step primary.”

While Ahn has yet to declare a presidential ambition, the DUP has begun preparations for its primary, and several political heavyweights, including Moon Jae-in, Sohn Hak-kyu and Kim Du-kwan, have announced bids.

Lee and other leaders of the DUP want Ahn to join the DUP soon so that the party can have a single primary, rather than figuring out how to work with Ahn later.

Ahn is an independent, but he has made clear that he wants to see the defeat of the ruling Saenuri Party.

“The primary preparation committee reported Monday that the rules will be finalized by July 20,” Lee said. “Once the primary starts, the rules cannot be changed in the middle. This means Ahn must join the DUP if he wants to run in the primary.”

He said the DUP aims to select its candidate before the Chuseok holiday on Sept. 30.

While the alliance with the Unified Progressive Party is a crucial part of the liberals’ campaign to win the December presidential election, Lee expressed dismay at the recent controversy surrounding Representative Lee Seok-gi of the UPP.

Representative Lee, the de facto leader of a pro-North faction of the UPP, said last week that he disapproves of Korea’s national anthem “Aegukga,” provoking criticism of his view of the nation’s identity.

“We have never doubted that it was not the national anthem,” DUP Chairman Lee said. “It becomes difficult when you begin denying it.”

“His recent remarks and actions show that he is not a man of common sense politics,” Lee said. “The lawmaker and the UPP should be seen separately.”

The DUP chairman said the latest controversy surrounding the UPP lawmaker is extremely unfortunate, but it is still an important task of the DUP to enable UPP supporters to help defeat the conservative Saenuri Party.

“The UPP will form its new leadership soon, and the fate of the liberal alliance will be decided after listening to their positions,” Lee said.

In the interview, Lee criticized Park Geun-hye, former head of the Saenuri Party and its long-time presidential front-runner, for her “stereotypical authoritarian thinking and high-handed ideas.”

Earlier this month, Park said a person with a questionable view of the nation’s identity must not be a lawmaker, prompting the conservatives to attack the ideological standings of the liberals.