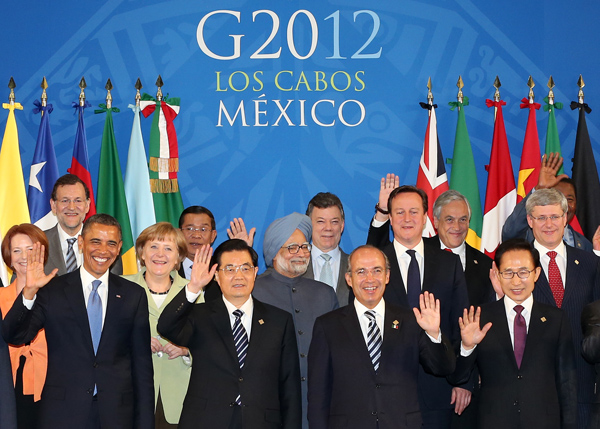 Leaders of the G20 nations gather for a group photo at the G20 summit in Los Cabos, Mexico, Monday. [REUTERS/YONHAP]

The two leaders reached the agreement during a meeting on the sidelines of a summit of the Group of 20 major economies in Mexico’s resort city of Los Cabos, sharing a need to further boost trade and investment between the two countries. Korea and Canada launched free trade talks in 2005, but the negotiations have stalled since the 13th round in 2008 over Seoul’s ban on Canadian beef imports. The ban was lifted early this year.

Shale gas refers to natural gas, mainly methane, that is produced from shale formations. It has become an increasingly important source of natural gas in the United States as advancement in drilling technologies has made it possible to access large volumes of shale gas that were previously uneconomical to produce.

The two countries forged diplomatic relations in 1963 and next year marks the 50th anniversary. Bilateral trade volume amounted to $11.5 billion last year. Monday’s summit was the fifth between Lee and Harper.

Meanwhile, Lee appealed to the crisis-mired euro zone Monday to make excruciating efforts and come up with fundamental solutions to its debt problems, saying the crisis is threatening to hurt economies beyond the single-currency bloc.

The debt crisis dominated a summit of the G20 major economies that opened in Mexico’s resort city of Los Cabos earlier Monday as the crisis showed little signs of letting up, though a worst case scenario was averted with Greeks voting to remain in the zone in Sunday’s general elections.

“The crisis in Europe is affecting the entire world, of course including South Korea,” Lee said during the first session of the G20 summit, according to presidential spokesman Park Jeong-ha. “I once again urge directly concerned euro zone nations to put together fundamental measures in an excruciating manner.”

Korea is now able to contribute to the rescue funds of the lending agency, he said. Lee said he hopes to see the European Union come up with fundamental solutions to the crisis at a summit set for later this month, and that the world should take the crisis as an opportunity to check on and cure the vulnerabilities of the global economy. Yonhap