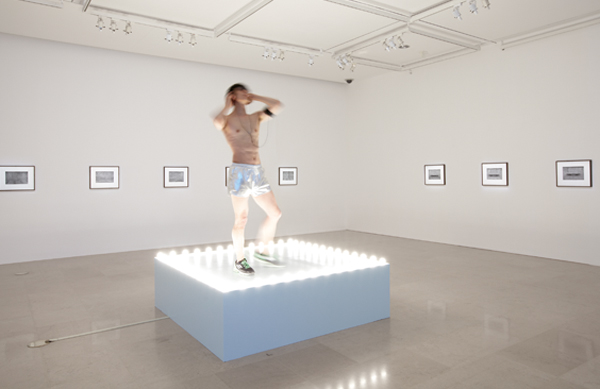 Many young Korean artists refer to Felix Gonzalez-Torres (1957-96) as someone who has inspired them, though his name is not familiar to many art lovers here whose interests tend toward modern art or the old masters.

Accordingly, getting to know Gonzalez-Torres could be a very good introduction to contemporary art. His first retrospective in Asia opens today at Plateau gallery in central Seoul.

Titled “Double,” the exhibition presents the 44 works of Gonzalez-Torres encompassing installations of found objects, photography and a performance.

Arranging the exhibition was especially challenging because of “the malleable nature of his works,” said Ahn So-yeon, chief curator of Plateau.

“Untitled” (Perfect Lovers), which consists of two wall clocks symbolizing the relationship between two lovers. “Untitled” (Placebo) 1991, above right, is an installation work of candies that viewers are free to take. The candies are replaced periodically by the gallery. By Kim Sang-tae and the gallery


For example, Gonzalez-Torres’ famous 1991 work “Untitled” (Placebo) is “candies individually wrapped in silver cellophane, endless supply,” according to the guideline of the artist. The work’s “overall dimensions vary with installation” with an “ideal weight” of 454 to 544 kilograms (999 to 1,196 pounds). Ahn decided to display the work in a large rectangular shape at Plateau.

The “Untitled” (Placebo) at Plateau is Gonzalez-Torres’ work, but was never touched by the artist, who died at age 38. In addition, the work can be exhibited simultaneously at two different places hence the exhibition’s title, “Double.”

Gonzalez-Torres tried to dispel the traditional idea that a work of art has value because it is made with the artist’s own hands and is unique.

Viewers can take as many candies as they want and the gallery is supposed to replace them.

“The work is gradually destroyed as viewers take candies; it is related with the unavoidable death of all mortals as well as the death of Gonzalez-Torres’ lover, Ross Laycock, who died of AIDS in 1991, and the death of the artist himself, who was also a victim of AIDS,” said Ahn. “However, the candies are supposed to be refilled in ‘endless supply.’ Accordingly, the work repeats death and resurrection. So the work has eternal life.”

Ahn said she has not yet decided how frequently the gallery would refill the candies. “I’m considering letting the guard decide after explaining about the meaning of the work. I talked about the idea with the Felix Gonzalez-Torres Foundation and they said it’s a good idea.”

“Untitled” (Placebo) also carries political criticism about the U.S. government's lack of attention to AIDS in the 1980s, according to the gallery.

In terms of sexual orientation and race, Gonzalez-Torres was in the minority. He was born in 1957 in Cuba and emigrated to New York City in 1979.

Gonzalez-Torres’ sorrow over the suffering and death of his lover is also reflected in the 1987-90 work “Untitled” (Perfect Lovers).

It consists of two wall clocks, identical except for the times they display. Though they start at the same time, a gap gradually widens until one clock stops.

And if a viewer sees a half-naked man “in silver lame bathing suit, sneakers and personal listening device” dance on the artist’s “Untitled” (Go-Go Dancing Platform), he or she is lucky. The dancer is supposed to appear on the stage installation any time he likes, but only once a day and dance for five minutes.

With the dance, the artist laughs at the photos in the “Untitled” (Natural History) series, which show white-heterosexual-male-oriented monuments of the American Museum of Natural History.