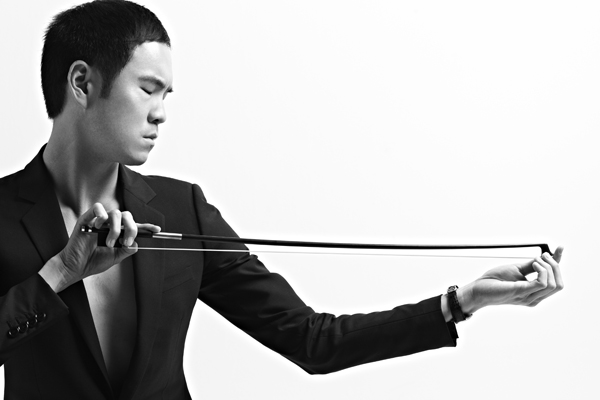 Internationally renowned violist Yongjae O’Neill, who is also a director in the 2012 Ditto Festival, will hold a joint concert, “For Solo - Project 2,” with other musicians tomorrow night at the LG Arts Center. See MUSIC, left. Provided by Lee Sang-wook

Tomorrow: Violinists Kim Su-yoen and Kang Jumi Clara kicked off the 2012 Ditto Festival "Nuovo Ditto" with their opening performance "For Solo - Project 1" yesterday. Their second performance "For Solo - Project 2" will be held tomorrow. The two soloists' performances will be accompanied by the director of the Ditto Ensemble, Richard Yongjae O'Neill, who is also an acclaimed violist; guitarist Park Jong-ho; and the Matador Guitar Quartet.

The Ditto Ensemble has been called the "most innovative and popular icon of the Korean classical community" since its founding in 2007 under the direction of O'Neill. For more information on the festival, visit www.dittofest.com.

Saturday: The Sejong Center for the Performing Arts will host a joint performance by Italian organist Pier Damiano Peretti and French organist and composer Jean-Baptiste Robin.

Peretti won first place at the St. Albans International Organ Competition in 1999 and since then has toured the world.

Since 2009, he has been a professor at the University of Music and Performing Arts in Vienna. Robin is regarded as the top student of notable French organist Marie-Claire Alain, who often performs substantial works from memory.

In 2000, Robin was appointed to the prestigious post of organist at Poitiers Cathedral and now is an organist at the Palace of Versailles.

Sunday: Critically acclaimed musicians Isabelle Faust and Alexander Melnikov make their first appearance in Korea this Sunday. Introducing their debut album "Complete Sonatas for Violin and Piano" in 2009, the duet quickly rose to prominence and swept multiple music awards including the Gramophone Award and BBC Music Choice Award. They were also nominated for a Grammy.

Melnikov is a Russian-born pianist and has also won multiple awards. The two became regular recital partners, and their Beethoven sonata performances have been highly praised by the international classical community.

July 6: Since 2004, Maksim Mrvica, a famous Croatian crossover pianist, has held concerts every year in Korea. Mrvica kicks off his "Maksim Mrvica Korea Tour" July 6 in Seoul, then moves on to Gwangju, Busan, Daejeon and Daegu.

Since making his first album "Gestures" in 2000, Mrvica has performed in several genres. His dynamic piano playing is accompanied by electric sound and a strong beat. His masterpiece, "The Flight of the Bumble Bee," was highly acclaimed by critics who said, "His fingers are gifts from God."

Aug. 19: Will the real Slim Shady please stand up? For the first time in Korea, he will. Eminem's "Recovery Tour" makes its way to Seoul this summer after stops in the Americas and Europe.

The U.S. rapper and producer was the best-selling artist of the 2000s, with his debut album "The Slim Shady LP" propelling him to fame in 1999. He became the first artist to win three consecutive Grammys for best rap album. Currently, more than 86.5 million copies of his albums have been sold worldwide.

To July 31: "Wicked" is a musical based on Gregory Maguire¡¯s best-selling novel "Wicked: The Life and Times of the Wicked Witch of the West." The original Broadway production of "Wicked" has been nominated for 11 Tony Awards, including best musical, orchestrations, costume design and scene design. The long-running musical combines a sensational story and addictive music.

To Aug. 5: The 1960s youthful spirit rises again with cheerful and awakening musical numbers and dancing in "Hairspray." Its premiere in 2007 was extraordinary.

To Oct. 7: The Korean version of the musical "Chicago" returns to the stage after a two-year absence with a new cast. "Chicago" tells the story of the "hottest stage in the world" in the roaring '20s, when the country was in the throes of a new kind of music - jazz.

July 10 to 28: Musical "Mozart" makes its way to Korea. In 2010, on its first performance in Korea, all 3,000 seats were sold out. Now with Korean actors, "Mozart" aims to show more than its original work with some 500 splendorous costumes and an orchestra.

To Wednesday: The word jami means "delicious food that is also nutritious," as well as "fun¡"in the dialect of Jeju Island. Admission includes a selection of Korean dishes and traditional tea. Performances are at noon on Monday, Tuesday and Wednesday.