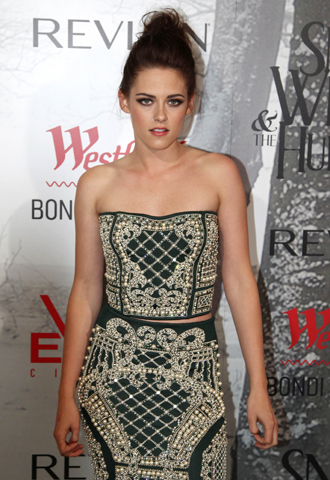 Kristen Stewart, who shot to fame as Bella Swan in "The Twilight Saga" films and has a starring role in "Snow White and the Huntsman", jumped to the top of Forbes.com's annual list of highest-paid actresses on Tuesday.

Cameron Diaz, who had a surprise hit with "Bad Teacher," came in second at $34 million.

"She [Stewart] is an up-and-coming star. She is earning a lot of money from one of the most successful franchises of all time. This is who you would expect to see right now," said Dorothy Pomerantz, Forbes Los Angeles bureau chief.

"This year you are seeing somebody young and at the brink of potentially great stardom sitting on the top of the list."

Forbes.com compiled the list and estimated salaries by talking to agents, managers and lawyers and based earnings on pay, profits, residuals, endorsements and advertising work.

Oscar-winner Sandra Bullock, who largely took a break from filming after 2009's "The Blind Side", came third with $25 million.

Jolie, who topped last year's list along with Sarah Jessica Parker, dropped to the fourth spot with earnings of $20 million while Charlize Theron, Stewart's co-star in "Snow White and the Huntsman" who also appears in "Prometheus", trailed at $18 million and rounded out the top five places.