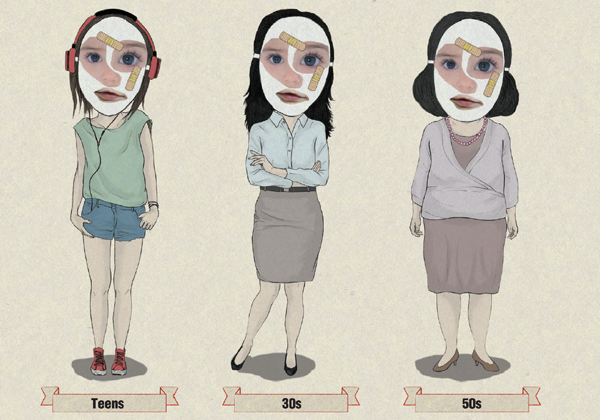 
Baby-faced Lee Hye-jin, a 29-year-old office worker in Seoul with big eyes and a small, rounded face, is one of the lucky ones as far as many Koreans are concerned. On every blind date or job interview she's ever been on, Lee said one of the first things she hears is, "You are such a dongan!" The Korean word refers to someone who looks younger than his or her age.

For many Korean women, being compared to popular, innocent-looking celebs like Shin Min-ah and Uee of girl group After School comes as a flattering compliment. But Lee said that the word "bagel girls," a fad term in Korea referring to these female stars, is "creepy" and "offensive towards women." It is a rough portmanteau of baby-faced and glamorous ("glamorous" in Korea often refers to a woman with large breasts and hips).

"I'm young already - how much younger looking do I need to be? And what is this concept of wanting a baby's face attached to big breasts? It's like they want me to be a baby and a fully-grown woman at the same time . . . It's ridiculous," Lee said.

"It's one thing to say that on a date or casual meeting but when someone compliments me for being a dongan during a job interview, it doesn't seem right." 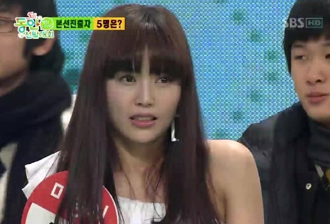 Ma Seung-gi, 45, one of the contestants on the SBS program Dongan Contest last year, has an 18-year-old son. Captured from the show

Lee isn't alone in feeling the ill vibes attached to the recent dongan trend in Korea. In numerous interviews with the local media, actress Shin Se-kyung, one of the first celebs here to be dubbed a bagel girl, remarked that she does not like being called either term and prefers to be referred to as a smart or quality actress rather than being objectified as "innocent yet sexy looking."

But if beauty and plastic surgery trends are as telling as they seem, the dongan is here to stay, and Korean women are going to extreme lengths to transform there faces to adhere to these standards. From fast-selling anti-aging cosmetic products to high-risk jaw surgeries, it seems there is little some women won't do to look young, innocent and sexy.

Plastic surgery trends have veered away from the relatively simple double eyelids and nose jobs to "petit" and "royalty" cosmetic surgeries, which refer to smaller-scale cosmetic procedures that focus on putting extra volume in cheeks, under eyes and on foreheads.

"Up to the 1990s, Koreans were mostly concerned about making their eyes bigger and noses higher, but as cosmetic surgery advanced, people wanted natural-looking jobs that create a youthful, fresh face," said Hong Jeong-geun, director of Metro Plastic Surgery Clinic in Seoul.

Along with these less obtrusive surgeries, however, a more invasive, high-risk facial surgery that Koreans call yangak susul, a form of bimaxillary osteotomy surgery that involves cutting the upper and lower parts of the jaw, has gained popularity here.

First grabbing headlines after a handful of local celebs went through the procedure, including Shin Eun-kyung, Kim Ji-hye and Sin-I, the procedure is often referred to as the ultimate dongan surgery by making the jaw more rounded. After actress Shin Eun-kyung revealed her before-and-after photos, media reports raved about how much younger-looking she had become.

But the extreme course doesn't come without its risks.

"Yangak susul is only meant to be done in very severe, abnormal cases in which patients have lower jaw protrusions or cross-bites. It is not meant to be performed as a beauty surgery as it is severely invasive with high risks of damaging nerves," said Hong.

"Even as a plastic surgeon, I think the dongan trend and the surgeries that go with it are becoming excessive. Korean women are getting worryingly numb about changing their face through artificial means."

The more common path to a dongan face is through the widely available cosmetics products. In the latest survey conducted by the Korea Food and Drug Administration, the number of dongan-related anti-aging beauty products sold in the country rose by 13 percent last year compared to 2010. The administration also stated that while in the past whitening products, or lotions that make one's face brighter and paler, were top sellers, these days anti-wrinkle and anti-oxidant products are sweeping through the market.

"Ten or 20 years ago, the main makeup trend here was basically to make a Western kind of face. The goal was to make your eyes look bigger, your nose higher and your face sharper," said Choi Eun-young, head professor of the cosmetology department at Hanseo University.

"But with the dongan trend, Korean women concentrate more on making their skin more youthful looking and their features to look innocent and baby-like, hence the popularity of BB creams [blemish balm creams] and shimmer products."

Shim Jae-hong, head dermatologist at CNP Cha & Park, said the pressure to look baby-like has resulted in dermatological innovations, with the new laser treatments being used commonly including erbium, ultrasound and Nd:YAG, among others.

"The essence of a baby-like face is in volume. In the past, there was more of an emphasis to stop skin from sagging by snipping excess skin like in a facelift," said Shim.

"But these days, it's all about volume repair, filling in your cheeks or other parts that lose fat as you age through artificial means including Botox, fillers or laser treatments."

Although on the surface, the dongan trend taps into vanity-related issues, for many Korean women the benefits of being a dongan reach all areas of their lives, including their marriage and career. Kim Se-won, a 26-year-old job seeker, confessed that she recently consulted a plastic surgeon before attending her job interviews scheduled for the latter part of this year.

"I went with my mom to see several plastic surgeons to see what kinds of procedures I can do to look younger," said Kim.

"With youth unemployment skyrocketing, everyone around me has a very good resume already, graduating from good schools with good grades and so on. The last step for me, to make myself more competitive, is to enhance my looks."

"The younger looking you are as a woman the better, because when men consider marriage, they worry about whether the woman is of an appropriate age to have a baby, and that she is not too old to have one," Kim said.

According to Lee Na-young, a professor at the sociology department of Chung-Ang University, the obsession among Koreans to be or look young stems from the contradictory values of modern Koreans and the influence of the current youth-obsessed culture mixed with the male-dominated values of Confucian traditions.

"At least in the United States, the 'Lolita complex,' or wanting young women and viewing them as sexual objects, is seen as taboo," said Lee.

"But in highly competitive Korea, because the country has modernized so rapidly, these taboos are not mentioned, in which case these celebs proudly declare themselves as bagel girls or dongan and men are not scrutinized for preferring younger women."

Professor Lee added that the Hallyu and teen idol culture in Korea has also played a significant role in spreading the dongan trend.

"It's very strange that the number one priority that Korean society sets for teens is to study hard and get into a good university, but that in mass media, teen idol groups are revered for their youth and sexuality. It shows that Korean society, in regards to sexuality and age, is very confused," she said.

Park Eun-jin, a graduate student at Yonsei University's cultural anthropology department who worked for the Korean Women's Environmental Network, agrees that labels like bagel girl and dongan, are a product of a youth obsessed media and a highly competitive culture here.

"Popular culture in Korea asks the impossible of women - to be immature but nurturing and competent at the same time,"Park said.

"We are supposed to look like babies but be glamorous and sexy as well as be maternal and make lots of money. It just goes to show you how confused people are in their values in this dizzyingly competitive country."