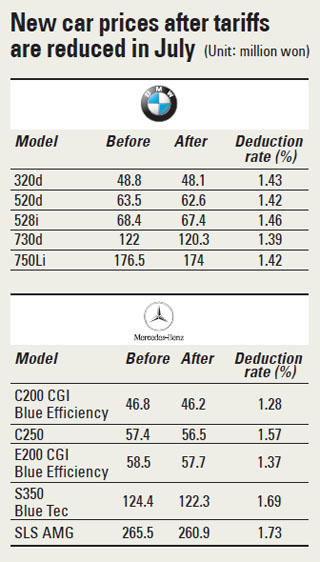 As the Korea-European Union free trade agreement celebrates its first anniversary on July 1, tariffs on cars imported from Europe will be cut from 5.6 percent to 3.2 percent, signaling a drop in prices for consumers.


The tariffs were originally set at 8 percent but Korea and the European Union agreed to phase them out gradually when they signed the trade deal last year.


The new rate of 3.2 percent goes into effect next month. It will be slashed in half again next year and fully removed in 2014.


European carmakers say they are ready to trim their prices, with some recently released models already reflecting the soon-to-be-revised tariffs.

BMW Korea, which sold 2,985 vehicles to outperform all other foreign brands in May, said some of its 7 Series and 5 Series vehicles will be sold at reduced prices from this month. Its 520d, last month's best-selling imported car with 993 units sold, will drop 900,000 won to sell for 62.6 million won. The more expensive 730d will shave off 1.7 million won, and the even pricier 740Li will become 2 million won cheaper.


"We have yet to confirm the reductions for other models, but they are likely to be in the 1.4 percent to 1.6 percent range,"said an employee at BMW Korea yesterday.

The company said the retail prices cannot be reduced as much as the tariffs because it must still pay local taxes and transportation costs.

Audi and Volkswagen have yet to announce their price reductions. Audi Korea said it is discussing trimming 1.5 percent off most of its models, with the exception of the new A5 coupe and cabriolet, as their prices have already been revised down in consideration of the coming tariff cuts.