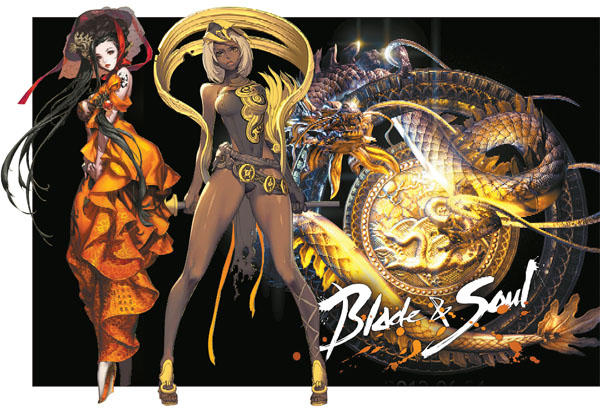 The game is due to hit local shelves later today.

Korea's NCsoft has invested more than 50 billion won ($43.4 million) over the last five years in developing the highly anticipated game.

But it may struggle to dislodge the latest Diablo installment from the No. 1 spot as this is estimated to have sold over 900,000 copies here since its release about five weeks ago.

While some critics believe Blade & Soul will easily match the company's previous hits in terms of popularity in the domestic market, such as Lineage or Ion, others are skeptical.

Especially, the company has gone through dramatic changes in the last two weeks.

On a recent weekend, a smoky Internet cafe in Seoul was filled with teenagers and adults fiercely pounding on their mice and keyboards while hacking skeleton warriors and zombies to pieces in the fantasy world of Sanctuary, where Diablo III is set.

It has been more than five weeks since the U.S. game was launched in the Korean market, but there have been no signs of sales losing steam.

It retails for 55,000 won, but a special collector's package was available on the first day of sales for 99,000 won. Industry insiders say fans will happily pay three times the cost of these just to own one, a sign of the fever the game has generated.

Even in Yeouido, western Seoul, blue collars and traders at brokerages often rush to nearby Internet cafes during their lunchtimes to blast the undead back to hell.

"My husband spends every night playing Diablo III," complained a 36-year-old newlywed. "I think the game itself is evil."

As the number of gamers exceeded what Blizzard's infrastructure could handle, though, connectivity became a major problem and the government was forced to step in after users complained they couldn't access the servers to play the game.

Blizzard was forced to give them refunds and change its contract policies. Despite the bad press, however, local support for the game shows no sign of waning.

The game industry estimates that Diablo III now controls more than 30 percent of the online game market.
Its popularity has also spilled over to the PC industry, with sales of PC parts believed to have grown more than 30 percent from a year ago as gamers upgrade their computer capacity to exploit what the game has to offer. 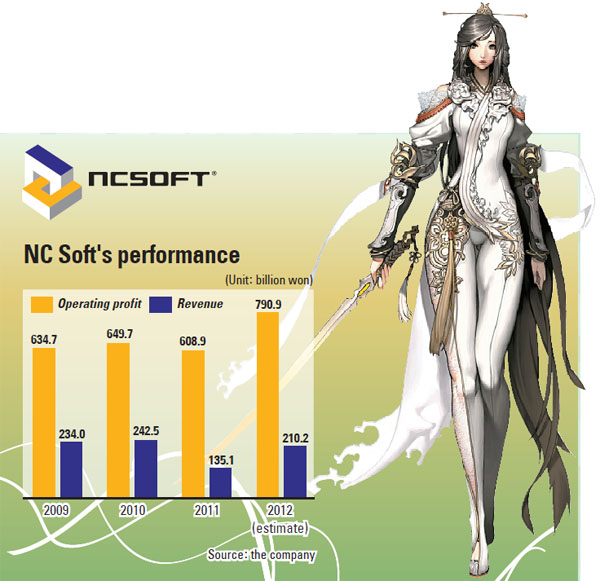 Rising to the challenge

Even Jay Wilson, Diablo III's game director, expressed keen interest in Blade & Soul during his visit to the capital in April.

NCsoft badly needs a new hit as it hasn't registered any since Ion in 2008. Nexon, another local game developer, has also failed to capture the imagination of gamers despite releasing numerous games targeting adults.

NCsoft hopes Blade & Soul will boost its revenue, which last year shrank 6 percent to 608.9 billon won. Market experts estimate the game could raise its income stream by as much as 20 percent.

"Blade & Soul and Guild War 2, which is expected to be released in the third quarter, will gain wide popularity," said Lee Seon-ae, an analyst at IBK.

"Between 130,000 and 150,000 gamers are expected to start playing it [Blade & Soul] and create characters."
With high expectations, NCsoft shares in the last four days have been rising. Yesterday, the game company's shares added 2.66 percent to 270,000 won.

This is a positive note for the company whose share value after reaching 280,000 won on May 11 fell to the point where it was dwindling around 200,000 won.

Yet some remain skeptical of NCsoft's chances of making a strong comeback.

"In recent weeks, it has gone through too many major changes, and this could prove a worrying distraction as it moves to launch the new game," said one game industry insider.

On Friday, Nexon announced that it has become the largest shareholder of NCsoft after purchasing a 14 percent stake that was previously owned by NCsoft founder and CEO Kim Taek-jin.

This came as a surprise, especially considering that NCsoft and Nexon are considered rivals, despite offering different content aimed at slightly different demographics.

Nexon is the leading game company in Korea, but most of its games, such as Maple Story and Kart Rider, sell to a younger audience, whereas NCsoft, famous for Lineage and Ion, has a huge following among older male players.
NCsoft's Kim is believed to have pocketed more than 800 billion won from selling his shares to Nexon, but he has not announced what he plans to do with the sudden windfall.

Rumors have spread that Kim ditched his shares because Blade & Soul fell short of his expectations.
Kim was deeply involved in developing the game.

Moreover, NCsoft for the first time announced that it will embark on corporate restructuring, leading to speculation that NCsoft may abandon smaller-scale video games and focus exclusively on Mmorpg games.
NCsoft also seems to be scaling back its work force.

Industry insiders said it started accepting applications for early retirement this week with the promise of six-month paychecks.

Rumors are abounding that between 7 percent and 30 percent of its 2,800 employees will ultimately be let go, many of them game developers.

Some believe this may be down to the influence of Nexon, which has a record of restructuring other companies it has taken over.

After acquiring NeoPle in 2008, Nexon reorganized it to focus on the development of Dungeon & Fighter.
In 2010, it also proceeded with corporate restructuring when it took over GameHi, famous for its game Sudden Attack.

This has also spurred concerns that the service and management of NCsoft's games may suffer.