SK Telecom to use LTE for voice, video calls

SK Telecom to use LTE for voice, video calls 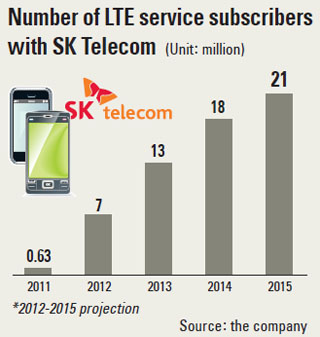 SK Telecom, a leading mobile carrier, said yesterday it would make long-term evolution (LTE) connectivity available with voice and video calls by late September at the earliest. LTE has thus far only worked with data transmission.

Celebrating the one-year anniversary of the launch of LTE, the telecom arm of SK Group said it has nicknamed VoLTE, or Voice over LTE, "HD Voice," likening the crystal-clear quality of the voice call to crisp high-definition.

Compared with 3G voice calls, HD Voice offers up to 2.2 times better sound quality thanks to its wider frequency band, said Bae Joon-dong, president of network operations business at SK Telecom, during a press conference at the company headquarters in central Seoul yesterday.

The evolved format of the smartphone mobile connection will also shorten the time span required for call connections by 2.5 seconds, effectively halving the normal connection time.

VoLTE subscribers will be able to switch from a voice call to video chat while in the middle of a conversation and share photos, videos and locations during the call.

When asked about the monthly subscription fees for VoLTE, the president said his company intends to charge the same monthly plan as that of the 3G network in a bid to lure more users.

A final decision will be made after discussions with the Korea Communications Commission, he added.

Even if SK Telecom launches the VoLTE, however, for users to fully enjoy it, two other carriers - KT and LG U+ - should also kick start the service over a similar period, said Jang Dong-hyun, chief marketing officer. Otherwise only SK Telecom subscribers to VoLTE can take advantage of the benefits it offers. The two carriers have said they will launch VoLTE in the second half.

Kwon Hyok-sang, head of SK Telecom's network division, stressed that the new voice call format will be "incomparably better" than mVoIP, or mobile Voice over Internet Protocol, adding mVoIP may only be used as a complementary option for voice calls.

Carriers have been complaining that Kakao, operator of KakaoTalk, has been exploiting their mobile networks and have said the free call service would deal a huge blow to their profits.

Kakao, on the other hand, raised the allegation last week that carriers have manipulated their mobile network to intentionally degrade Voice Talk's quality ? although carriers say Kakao's claim is groundless.

SK Telecom is also preparing to introduce RCS, or rich communication suite, in the second half, which many mobile carriers predict will replace the current short message service (SMS) and multimedia messaging service (MMS).
The new messaging platform is similar to KakaoTalk in that it enables instant messaging and video and photo sharing.

As to whether Samsung Electronics' highly anticipated Galaxy S3 smartphone, scheduled to be unveiled to the Korean press in a few weeks, will embrace VoLTE, an SK Telecom spokesman said the company could not yet confirm any speculation.