Ahn lashes back at disparagements by the DUP

Ahn lashes back at disparagements by the DUP 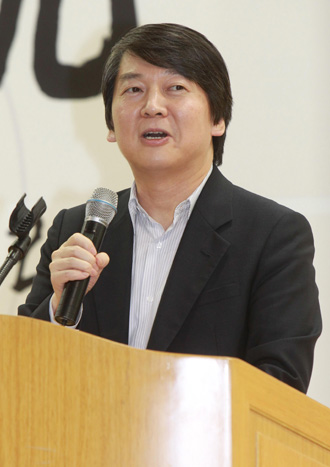 Ahn Cheol-soo, the software mogul-turned-professor whom many liberals want to run for president in December, lashed out at mainstream opposition politicians who have been trashing his ambiguity over the presidential race.

"The recent comments of some DUP people are hurting Mr. Ahn," Yoo said in the texts. "It's difficult to know why they say things like that. We hope they think about whom their comments will help. Respect between people builds up trust."

The main opposition party is getting more impatient for a decision by Ahn, an independent and a political rookie, about whether he intends to run in December and if he will do so as a DUP member. The party is planning its presidential primary, which will probably be in September.

There is no political superstar in the DUP as powerful as the ruling Saenuri Party's Park Geun-hye. But in opinion polls, Ahn is running neck-and-neck with Park.

Ahn, founder of software company AhnLab and currently dean of Seoul National University's Graduate School of Convergence Science and Technology, has remained coy about his intentions. On May 30, he said in a lecture at Pusan National University, "Don't believe anyone who says anything about me. I will publicly state my position if I determine something."

Under DUP rules, the candidates in a presidential primary should be announced 180 days before a presidential election, which would be tomorrow. In 2002, when Roh Moo-hyun won the DUP's primary, the party leadership officially confirmed his candidacy on April 28.

DUP figures have been pressuring Ahn to make up his mind in recent interviews with the JoongAng Ilbo.

DUP Chairman Lee Hae-chan said Tuesday, "Even if Ahn declares his candidacy now, it's a little bit late already." Sohn Hak-kyu, an advisor of the party, said, "He offers nothing but an empty image." Kim Du-kwan, South Gyeongsang governor, said, "It would be really dangerous for an independent candidate to run national affairs."

Moon Jae-in, an ally of former President Roh, said June 12, "[Ahn] has a certain kind of vague support at this moment. I think I won't be defeated [by him]."