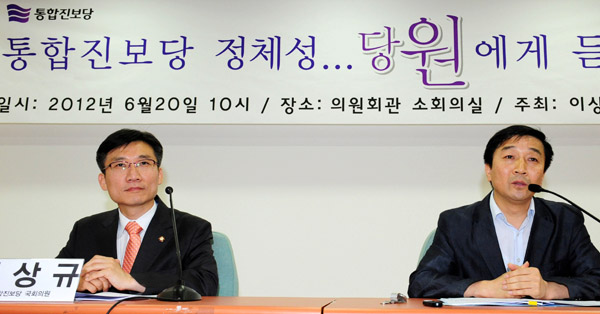 Lee Ui-yeob, right, an inner-circle member of the UPP39s Gyeonggi Dongbu Alliance, speaking at a debate held in the National Assembly yesterday. [NEWSIS]


The dominant, pro-North Korean faction of the minor opposition Unified Progressive Party debated how to get over the public uproar over its ideological views yesterday, and decided to stick to its decades-old convictions.

"If a liberal party follows only what ordinary people want, they will face a self-contradiction in which they will deny what they strive for," said Lee Ui-yeob, an inner-circle member of the UPP's Gyeonggi Dongbu Alliance, composed of mostly former pro-North student activists from the 1970s and 1980s. "Our top priority at this moment is to prevent the party from degenerating."

The party's largest faction held an open debate yesterday at the National Assembly to decide its future course.

Hosted by Lee Sang-kyu, a Seoul-based geographic lawmaker who is also a core member of the faction, the debate rebutted the party's interim council, led by a smaller faction, which wants to jettison some of the leftist ideology and also kick out four hard-line leftists who won positions in an allegedly rigged primary in March.

The leadership run by the UPP's smaller faction recently announced reform measures for the party to make it less leftist and pro-North Korean to move it closer to the center.

In their debate yesterday, the Gyeonggi Dongbu Alliance members clarified their position on maintaining stances that are hard line against the U.S. military presence and pro-Pyongyang.

"In the name of reform, [the leadership] is causing more turbulence," said Lee Sang-kyu, a newly elected lawmaker who recently made headlines for refusing to comment on North Korea's dictatorship and dynastic succession.

"The rigged primary scandal was an irrational, crazy witch hunt based on groundless allegations," said Lee Ui-yeob, who was convicted in 2000 of forming a spy ring for North Korea and served two years and six months in jail.