Crops bite the dust as farmers pray for rainfall

Crops bite the dust as farmers pray for rainfall 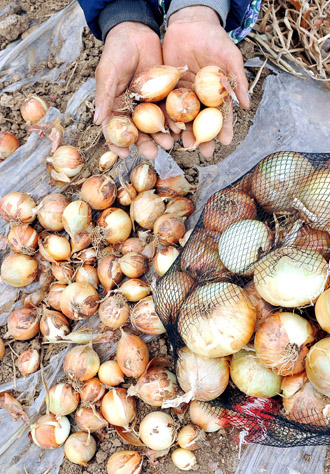 Due to an ongoing drought, onions farmed in Seosan, South Chungcheong, are much smaller compared to onions grown under normal weather conditions. By Kim Seong-tae

Kim Yong-hee, a 75-year-old farmer who grows onions in Seosan, South Chungcheong, 125 kilometers (77 miles) south of Seoul, sighed deeply on Monday while holding up onions the size of small potatoes due to a prolonged dry spell in the region.

"Though the taste is the same, the size is so small. Nobody would want to eat these," said the farmer.

The farm land is so dry that dust flies as Kim digs up his onions.

Another farmer, Seong Han-guk, who grows potatoes, only managed to harvest 25 to 30 boxes of potatoes from a 20-kilogram (44-pound) sack of seeds, which should have given him 40 boxes under normal weather conditions.

The bigger problem for Seong is the size of his crops. Due to the reduced size, he can only get one-third of the price he would normally get for full-grown potatoes.

The prolonged lack of moisture is aggravating anxieties among farmers. Crops are not properly growing to their full size and are also at risk of dying altogether due to a lack of adequate irrigation water.

"I have farmed for a long time, but never before has the drought been as severe as this," said a farmer in his 70s in Seosan.

Some 45 percent of farming fields, 59 hectares (145 acres) out of 130 hectares in total, in Seosan now remain unplanted because of the lack of rain.

Since May, the city has received 18.5 millimeters (0.7 inches) of precipitation, only 20 percent of a normal year.

"The local government is doing everything it can, including employing fire engines to supply water, but the efforts stop short of providing enough moisture for farming," Seosan Mayor Lee Wan-seob told the JoongAng Ilbo. "The amount of rice production this fall could be significantly lower."

Another side effect of the ongoing dry spell is an increase in forest fires. Compared to only 15 cases from the same period last year, 73 fires have been reported in regional mountains since May of this year, according to the Korea Forest Service.

Securing and supplying industrial water for local industry has also faced staggering difficulties. Five companies at the Daesan Petrochemical Industrial Complex decided to shift their water source last Friday from the nearby Daeho reservoir as its water level has dropped to 23 percent. The decision marks the first time ever that the complex has received its water source from elsewhere since its foundation in 1991.

To stave off more damage from the drought, the Ministry for Food, Agriculture, Forestry and Fisheries implemented on Monday an additional 5 billion won ($4.3 million) in aid, making the total support package 12.5 billion won.
By Shin Jin-ho [jkkang@joongang.co.kr]