New details on embezzling at banks

New details on embezzling at banks 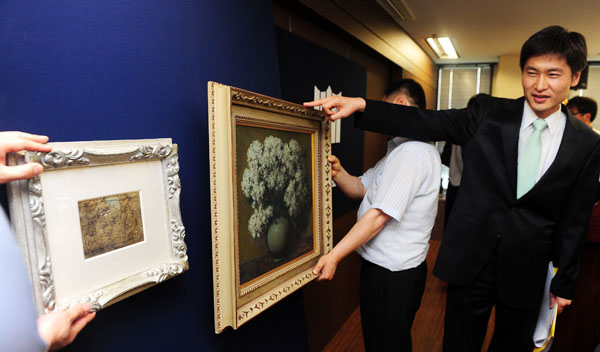 But the prosecutors said they failed to find evidence that the banks tried to bribe government officials or politicians to help prevent their debt-ridden banks from being suspended.

The central investigation team of the Supreme Prosecutors' Office announced yesterday the midway results of its probe into the executives of four savings banks - Solomon, Mirae, Korea and Hanju - over alleged involvement in embezzlement and breach of trust. According to the prosecution, the four banks issued 1.28 trillion won of illegal loans, including 453.8 billion won in bad loans.

Investigators also gave a list of the amount of money allegedly embezzled by each bank's chairman or chairwoman.

Prosecutors said that they have indicted 11 executives from the four banks including the four heads. They said they are currently questioning one more executive after arresting him.

The investigation was launched immediately after the Financial Services Commission suspended four savings banks early last month due to their poor financial health, including BIS capital adequacy ratios of less than 1 percent. Around 20 savings banks have been suspended by the FSC for being in woeful financial condition since last year.

Prosecutors also said that Kim Chan-kyong, chairman of Mirae, is suspected of walking off with 12 artworks owned by the bank and worth a total of 9.5 billion won. Investigators also alleged that Kim gave Solomon Chairman Lim Suk bribes including 1.4 billion won in cash, six 1-kilogram gold bars worth 360 million won, and two paintings - one worth 300 million won - to get his help to stop the Financial Supervisory Service inspection. Lim is known to have many connections in the financial industry.

Prosecutors have no further evidence of bribing of government officials.

Last month, prosecutors found evidence that Chairman Kim of Mirae allegedly granted a favor to the older brother of a Blue House official last year to help him regain control of a hospital. The prosecution hasn't yet summoned the Blue House official.

There was speculation that Hana's Kim Seung-yu tried to help Mirae Chairman Kim grant the favor, and Chun was their common link.

Prosecutors, however, were not able to launch a probe into the allegations against the two financial officials.

"We will continue investigating the four savings banks over their alleged link with government officials and politicians," said Choi Woon-sik, head of the investigation team.