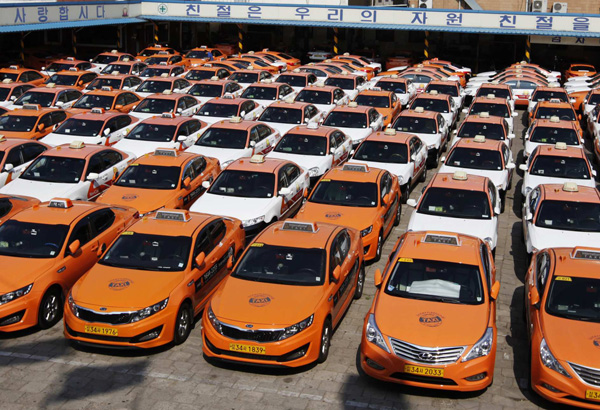 Taxis are parked at a taxi company in Gwangjin District, eastern Seoul, as drivers held a nationwide strike yesterday. Taxi drivers across the nation launched a 24-hour strike yesterday to demand the government raise taxi fares and lower the price of gas. [REUTERS/YONHAP]

However, the strike didn't cause major problems as most people who were informed of the protest took public transportation.

The Korea National Joint Conference of Taxi Association, one of the four associations leading the strike, said that roughly 250,000 taxi drivers - 90,000 from taxi companies and 160,000 private drivers - in Seoul, Gyeonggi, Incheon, Gangwon, Daegu and Jeju participated in the strike since midnight yesterday.

With a slightly different figure, the Ministry of Land, Transport and Maritime Affairs reported that only 13.6 percent, or 34,858 of 255,881, taxis operated normally.

In Seoul, 64,827 of a total of 72,827 taxis stopped operation. The Seoul Metropolitan Government said that the number of people taking the subway increased by 4.2 percent, or 40,719 people, on yesterday morning.

At Seoul Plaza, central Seoul, about 40,000 taxi drivers gathered at 1:30 p.m. and held a rally until 3:30 p.m., demanding the government cut the price of liquefied petroleum gas (LPG), which is being used as an alternative fuel for most taxis, and designate taxis as public transportation in order to receive state subsidies.

"The taxi industry is on the eve of death," a spokesman for the Korea National Joint Conference of Taxi Association complained during the opening of the rally.

"The industry is oversupplied, the number of passengers is decreasing every day and the retail price of LPG is too expensive. But the government has totally ignored our circumstances and only supports subways and buses. If the government doesn't provide necessary support, we will hold another large-scale rally in October and stage a general strike in December."

The government dispatched about 2,300 riot police around Seoul Plaza to prevent any potential clashes, but no physical confrontation between strikers and the police was reported.

The strike didn't cause too many problems as many commuters were informed about the strike. It even pleased some people, especially those who drive their own cars for commuting, as they experienced less traffic congestion than usual.

But people who were not aware of the strike, including international travelers, experienced a few problems in places such as Jeju and Incheon, where many foreigners take taxis. Taxi drivers in Yeosu, South Jeolla, didn't join the strike in consideration of visitors of the 2012 Yeosu Expo.

"We will try to find solutions for reducing the LPG price by cooperating with the Ministry of Knowledge Economy, taxi associations and LPG providers," said Kim Yong-seok, the director of public transportation for the Ministry of Land, Transport and Maritime Affairs.