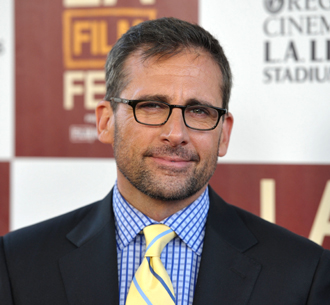 Steve Carell arrives at the premiere of “Seeking a Friend for the End of the World” at Regal Cinemas’ LA Live Stadium on Monday in Los Angeles. [AP/YONHAP]

LOS ANGELES - After leaving television’s “The Office” last year, Steve Carell immediately began production on the indie film “Seeking a Friend for the End of the World,” which opens in U.S. movie theaters on Friday.

The film is about an asteroid headed toward Earth that will destroy the planet. Carell plays a newly single man who decides to go on a road trip to find his high school sweetheart. He is unexpectedly accompanied by his neighbor (Keira Knightley) who wants to find a plane to take her to her family in England.

Carell talked with Reuters about playing Knightley’s love interest, and life after “The Office.”

Q.After six years on “The Office” the first thing you do is a quirky little movie. Why?

A. I thought the script was oddly funny and dark and absurd,

but also moving and relevant. I thought it would be very challenging to try and mine any sort of comedy based on this dark premise.

You mean the premise that an asteroid is about to hit Earth and everyone will die?

It’s the flip side of one of these big asteroid movies that we’ve all seen with the president and the hot line and the astronauts. This is a story of what everybody else is going through.

Few people know how much time they have left. Given the time you have, how do you chose to use it? Where do you find your joy? That’s very present in me on a daily basis. I have my wife and two little kids. I try to live in the moment and embrace what I’ve got.

You’re 49, Keira is 27. Is she the youngest woman you’ve kissed on screen?

Boy, that’s a tough one, because there have been so many!

Never! It would take the apocalypse to make it work.

These are two people that, given any other circumstance, wouldn’t become friends, let alone drawn together in a soulful way. .?.?. All of those things melt away and it becomes about who they are, what they need and what they care about.

Your other co-star is a dog who is a constant companion. What was he like to work with?

There were a few dogs, actually. There was the main hero dog, the junior varsity dog and a third dog. .?.?. They got increasingly stinky the lower you went on the ladder. Their breath became worse. Their dispositions became more ornery. Our main dog seemed to have an awareness that he was being filmed and would favor the lens. He would know how to compose himself in the shots. Dog Number Two and Three just wanted out by any way possible.

In August, you play a non-comedic role as a therapist to Meryl Streep and Tommy Lee Jones in “Hope Springs.” What was that like?

It was an interesting acting exercise because you have to limit any sort of impulse to judge, which is what a good therapist would do. There are no raised eyebrows, no cynicism. I tried to be almost faceless in it because it’s not how he feels about them, but about how he wants to help this couple.

The first season of “The Office” without your character Michael Scott ended in May. Any regrets about leaving the show?

No. I felt like it was the right thing to do and the right time for me to go. It’s very much akin to when I left “The Daily Show.”

I had a great job and good friends and a solid income .?.?. I just felt like if I’m going to leave, I better leave now before I get too comfortable. I figured it was time to try something else. You never know what might be on the other side.

You recently wrapped “The Incredible Burt Wonderstone” with Jim Carrey and “Anchorman 2” is about to start. Excited about reprising your role of meteorologist Brick Tamland?

They just officially green lit and we’re starting in February or March. We did a teaser trailer about two months ago.

That was the most fun day. We hadn’t been in these characters’ costumes in eight years. It was like no time had passed. We’d all wanted to do a sequel for years, so I feel like we’re all going to camp in February.