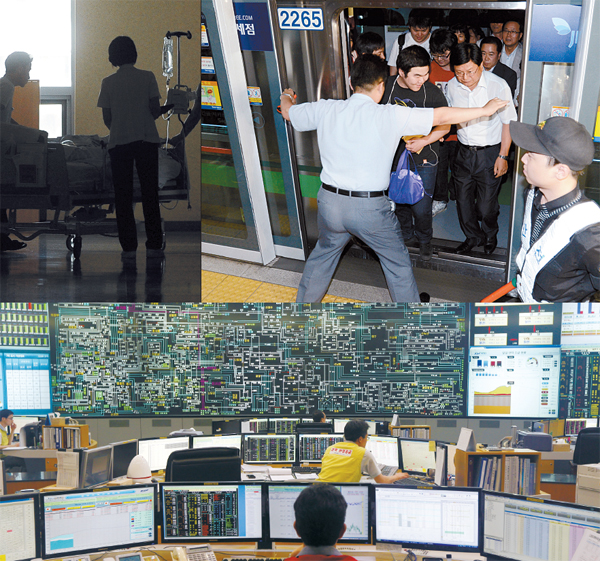 Clockwise from top left: Nurses move a patient at St. Mary’s Hospital in southern Seoul during yesterday’s drill; a worker helps passengers leave a halted subway car at Yeongdeungpo Station, southwestern Seoul; officials keep an eye on the power at the monitoring room of the Korea Electric Power Corporation in southern Seoul. By Ahn Seong-sik, [NEWSIS]


The first nationwide emergency drill to prepare for an electricity blackout was carried out at 2 p.m. yesterday for 20 minutes.

The power supply to 28 buildings in seven different cities was cut to check their readiness for a blackout.

The drill was supposed to train the nation about what will happen, and how to behave, if electricity reserves drop to a worrying level and emergency measures have to be instituted.

The drill came after the nation’s electricity reserves fell below the level designated by the government as stable, five million kilowatts, eight times in June.

The government even issued a public warning on June 7 when the reserves reached the worrying 3.6 million kilowatt level.

People across Korea were encouraged to cut back on unnecessary power use for 20 minutes. Public buildings were obligated to cut power.

The purpose of the drill was to minimize damage in case of a real blackout. “Emergency training is essential because it seems the electricity shortage will be with us for a while,” said Cho Suk, vice minister of knowledge economy, at a press briefing Tuesday.

The government managed to shave off up to two million kilowatts of electricity use by asking major industrial complexes to cut their usage yesterday afternoon.

At 2 p.m. sharp, sirens started sounding, which was supposed to be a signal to the populace that the nation’s electricity reserves had dipped below the two million kilowatt level. Louder sirens sounded at 2:10 p.m., signifying that the situation had worsened. The power supply to 28 buildings in seven cities, including Lotte Mart in Guro District, southwestern Seoul, was cut.

Lotte Mart ran an emergency power generator to supply power to selected places, including its fresh food section. It used 40 percent of its normal electricity use for 10 minutes. Drills were held to practice moving patients to and from hospitals without power and to rescue people from stranded elevators.