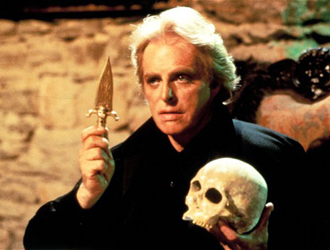 LOS ANGELES - Richard Lynch, who employed his platinum hair and scarred face to play villainous characters in such films as “Bad Dreams” and “The Sword and the Sorcerer,” has died. He was 76.

Baronas said Vogel found him on the kitchen floor, and “from what I currently understand, no investigation into the cause of his death will be made as his body was sent directly to a funeral home.”

The actor appeared in dozens of horror and sci-fi films in a career spanning four decades. He played serial killer Michael Myers’ principal in director Rob Zombie’s “Halloween” remake in 2007.

His most recent role was in Zombie’s upcoming movie “The Lords of Salem.”

“I woke up this morning to the news that our friend Richard Lynch has passed away,” Zombie posted Wednesday on Facebook.

“Richard was great to work with and really gave it his all. I will never forget the way he scared the crap out of the kid actors in ‘Halloween.’”

He appeared in such TV series as “Battlestar Galactica,” ‘’The A-Team,” “Six Feet Under” and “Star Trek: The Next Generation.”

Lynch had said he suffered scarring in 1967 after he set himself on fire while under the influence of LSD.