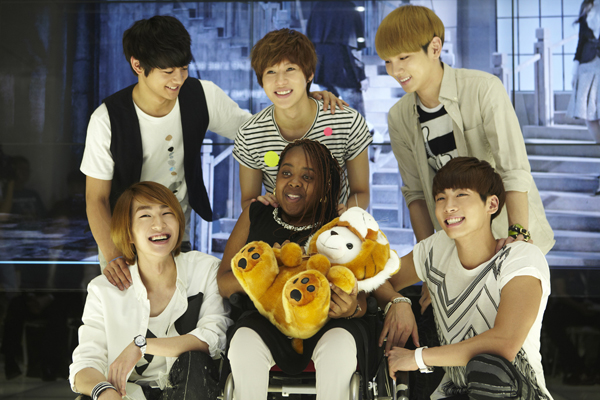 
SHINee made a special wish come true Wednesday by meeting with a terminally ill American fan. The boy band known for hits like “Sherlock” and “Ring Ding Dong” met 15-year-old Donica Sterling, who came from New York to meet her favorite K-pop groups.

On Sunday, Sterling also caught up with her other favorite boy band, Super Junior, on the set of its new music video in Namyang, Gyeonggi.

Sterling is unable to use her legs and is losing hearing. Her illness was not identified. She said she keeps her spirits up by watching Hallyu dramas and K-pop videos.

Herbert Black, president of American Iron & Metal, sponsored Sterling’s trip. She will stay in the country for two weeks visiting disability rehabilitation centers, meeting celebrities and attending K-pop related shows such as the 2012 K-pop Star Entertain Art Show, which is an art exhibition taking place at Kintex in Ilsan, Gyeonggi, from June 23 to Aug. 19.