Sharapova has eyes on Wimbledon

Sharapova has eyes on Wimbledon 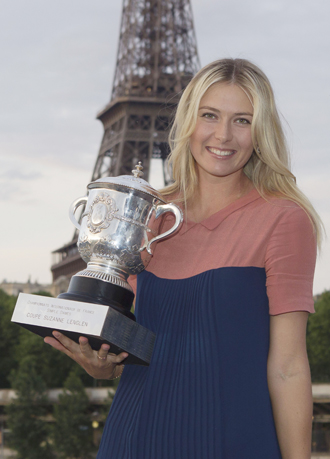 Maria Sharapova of Russia poses with the trophy after winning the women’s final match against Sara Errani of Italy at the French Open tennis tournament in Paris on June 9. [AP/YONHAP]

LONDON - As Maria Sharapova posed with the French Open trophy against the breathtaking backdrop of the River Seine and the Eiffel Tower, the Russian’s thoughts turned from her stunning surroundings in Paris to a small patch of grass in southwest London where she hopes to cap her remarkable return to the top.

Sharapova’s victory over Sara Errani in the Roland Garros final earlier this month was a cathartic moment for the 25-year-old, who had gone four years without winning a grand slam as she struggled with the aftermath of serious shoulder surgery.

Her grueling journey back to grand slam glory, and the world No. 1 ranking she now holds for the first time since 2008, is a testament to Sharapova’s fierce competitive instincts, but she has never been one to rest on her laurels.

So, while the flashbulbs and champagne corks were still popping in Paris in celebration of her career grand slam, Sharapova was already plotting a Wimbledon revenge mission. The tournament begins on Monday.

Just 12 months ago, Sharapova suffered one of the more surprising defeats of her career as Petra Kvitova of the Czech Republic romped to a 6-4, 6-3 Wimbledon final victory.

Sharapova had been the hot favorite to win the title for the first time since she entranced the All England Club as a 17-year-old who came from nowhere to beat Serena Williams in the final. Now she is determined to make amends.

“Of course it was reasonable for people to write me off because I was out of the game, I’d just had shoulder surgery,” Sharapova said. “And then, of course, my comeback story wasn’t like I got back on the court and I won a grand slam.

“I felt like I really deserve the French Open win because I worked so hard and I went through so many tough days to get here. Now I’ll start to think about Wimbledon.”

Sharapova’s title bid could be aided by the relatively poor form of several of the top seed’s main rivals.

Kvitova arrives in London desperately hoping to rediscover the winning feeling she savored 12 months ago.

Since defeating Sharapova, the 22-year-old has struggled to live up to her new billing as a major force in the women’s game.

She has no titles on the WTA Tour this year and suffered semi-final defeats against Sharapova in the Australian and French Opens.

If the 30-year-old American, who has 13 grand slam titles to her name - including four at Wimbledon - is in the right frame of mind, there is every chance she could bounce back quickly.

Prior to her Paris nightmare, Williams had been in good form, winning 17 successive clay-court matches and she is usually even more dominant at Wimbledon, even though she isn’t a huge fan of grass.