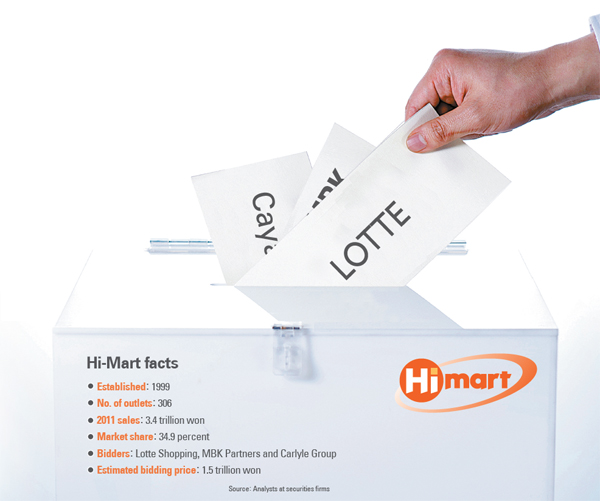 The chances of Lotte succeeding have multiplied as two strong rivals, Shinsegae’s E-Mart and SK Networks, announced on Wednesday that they will drop out the race, roughly a month after they submitted letters of intent (LOI) to purchase Hi-Mart’s shares.

Citi Group Global Markets, the overseer of the bid, is set to pick a preferred bidder as early as this week, according to sources at local securities firms.

“With the most plausible contenders, E-Mart and SK Networks, having backed out, Lotte Shopping has secured the high ground for the mega-deal, which we estimate to be worth between 1.5 trillion won ($1.3 billion) and 2 trillion won,” said Chung Yon-woo, an analyst with Daishin Securities.

“MBK Partners is also participating in the bid, but Eugene Group wants to sell Hi-Mart to a strategic investor that can best raise the retailer’s value in the long-term. This effectively gives Lotte a greater chance of securing the deal.”

Chung maintained a “buy” recommendation and kept his target share price of Lotte Shopping at 416,000 won per share.

Meanwhile, Hi-Mart shares closed at 55,900 won yesterday, down 8.96 percent from the previous day as Lotte is the only strategic investor participating in the bid.

When the company was put up for sale in December, Lotte was quick to present itself as the most accomplished and deserving suitor.

“Chairman Shin Dong-bin’s management philosophy, which reflects that held by Lotte’s founder and Chairman-in-Chief Shin Kyuk-ho, is that extravagant bids for companies should be avoided, even if such companies are in pristine condition,” said a senior executive at Lotte Group. He asked not to be named as the deal has not yet been completed.

“However, if the price is reasonable, we will snap it up as we can generate the best synergy effect.”

Lotte has been aggressively expanding into the home appliance retail business since it launched its Digital Park outlet at the retailer’s Seoul Station store in November 2009. It now runs 12 such stores, and each Digital Park outlet is located in a prime location.

Although Lotte refrained from elaborating on how it will run Hi-Mart if it clinches the deal, market observers said Lotte could open other shops that it owns - for example, coffee chain Angel-in-Us - inside Hi-Mart outlets to generate more profits.

Given that Lotte has been moving to penetrate overseas markets by opening outlets in China, Vietnam and Indonesia, market observers said it could open Hi-Mart shops there as well in the future.

“If Lotte were to acquire Hi-Mart, it would signal how the retailer is entering the electronics appliance market in earnest,” said Hong Seong-su, an analyst at NH Nonghyup Investment Securities. “The deal will create various synergies with Lotte’s ongoing businesses.”

Lotte has been scrambling to find a new source of revenue after the government in April imposed mandatory closures of stores to give mom-and-pop stores a chance to breathe. This means that large discount chain stores must close their doors for two days a month, with the exact dates to be chosen by local municipal authorities. In practice, these tend to be the second and fourth Sundays of each month.

Acquiring Hi-Mart would help Lotte Mart recover the losses it is racking up as a result of the new ordinance, industry insiders said.

Hong said Lotte will also have an advantage when negotiating profit margins for electronic appliances with manufacturers like Samsung Electronics and LG Electronics. These companies traditionally control the rate.

Shinsegae pulled out of the Hi-Mart bid as it was picked as the preferred bidder to acquire ETLand, another electronic appliances retailer. ETLand has 100 outlets and raised 550 billion won in sales last year.

Hong said he sees SK Network’s decision to withdraw from the Hi-Mart bid as a good thing due to the lack of synergy between the two.