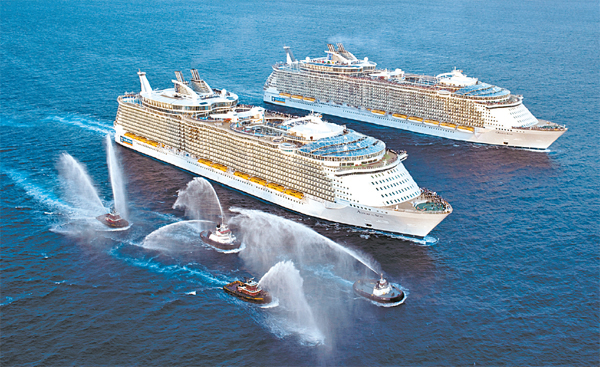 The world’s largest cruise ships by STX Europe, Oasis of the Seas and Allure of the Seas.


Under the new management strategy of STX Group, “Realizing Dream in the World,” the group is achieving 90 percent of its sales overseas.

The STX Group finalized the three major global producing networks that connect Korea, China and Europe in 2009 and has stepped up to build everything from merchant ships and passenger ships to marine plants and warships.

The STX Dalian shipbuilding complex, which started its full-scale operation at the end of 2009, has a fully-integrated production system from basic material processing to engine assembly and block fabrication, as well as shipbuilding and industrial plant building. STX Dalian has sold over 20 ships each in 2010 and 2011 and is establishing its production system. This year’s goal is making $2.1 billion in sales and selling 33 ships.

STX Group’s global management is showing off more in the plant-engineering field. As of the end of last year, STX Group has started on a large-scale diesel power generation plant construction in Iraq. STX Heavy Industries received orders from the Iraqi Ministry of Electricity for the first phase of construction to create a 2500MW, 3 trillion won ($2.6 billion) diesel power plant. STX aims to complete the construction by the end of June.

In the future, STX Heavy Industries is planning to construct 25 diesel power plants that can generate 100MW and contribute to resolving the electricity shortage issue in Iraq. STX Heavy Industries also received orders for the steel plants from Saudi Arabia’s South Steel Company in 2009 and received additional orders for steel plant expansion in November 2011. In addition, STX Construction won the bid for a $116 million residential area construction project from Saudi Arabia in October 2011.

In the meanwhile, STX Group is developing overseas resource development as its new driving axis.

In August 2011, STX Corporation purchased a roughly 40 percent stake in a coal mine located in Kintap, in Kalimantan, southern Indonesia, from IAC (PT Indoasia Cemerlang) at a cost of $30 million, securing coal production as well as its rights for sale.

The STX-IAC mine is producing over 2.5 million tons of coal and it plans to increase this number up to 4 million next year.

STX Energy also acquired 100 percent interest of the Maxhamish gas field in Northwestern BC, from Calgary-based EnCana, at $152 million Canadian ($148 million) in August 2010.