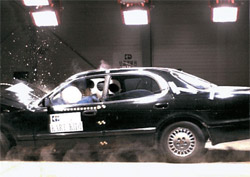 For a 46-year-old man surnamed Park, a former gang member in Dongducheon, northern Gyeonggi, the lives of family members were worth nothing but how much life insurance money he could get from them.

Park earned nearly 1.9 billion won ($1.7 million) from the life insurance policies he took out on people he killed.

The first target was Park’s wife. In October 1996, Park suggested Jeon, an acquaintance of Park, kill his wife to collect insurance. Park kept watch while Jeon strangled Park’s wife to death inside a car in a parking lot in Yangju, Gyeonggi. Park then disguised her death as a traffic accident by crashing into the car with Jeon’s car. Park received 145 million won from a life insurance company.

The second target was his brother. In July 1998, Park took out three life insurance policies under his brother’s name and killed the brother inside a car parked along the side of the road in Yangju two months later. Park then drove into oncoming traffic and collided with another car in the opposite lane with his brother’s corpse sitting next to him.

Just like his wife, the case was also considered a normal traffic accident and Park received 600 million won in insurance money.

The third target was his girlfriend’s husband. Park met a 41-year-old woman surnamed Choi in 2006 in an Internet chatroom. The police said Park persuaded her to put sleeping pills into her husband’s herbal medicine after hearing from Choi that the relationship between her and her husband, surnamed Kim, was on the rocks.

Park then took the drugged Kim and laid him in the street in Yangju and Shin, Park’s brother-in-law, ran him over. Kim wasn’t killed, but he was hospitalized for two years.

The last target was the brother of his second wife, whom he married in 2006. As soon as he got married, he took out three life insurance policies under his 69-year-old mother-in-law and killed his brother-in-law by smashing his head with a deadly weapon near a shopping center in Yangju in April of the same year.

Park then put the corpse inside a car and ran into the side of a bridge. Park received 1.25 billion won in insurance.

The police, however, eventually discovered that Park made up the story about his brother’s death.

The police said Park admitted to the murder of his wife and the attempted murder of his girlfriend’s husband, only because the statute of limitations, which is 15 years, had expired.