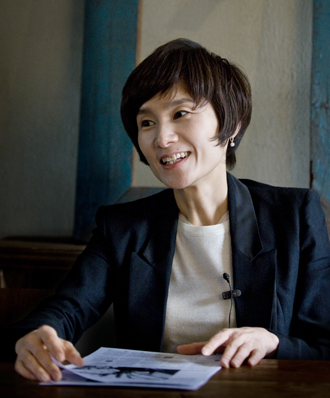 Hyun Jung-hwa, a former female table tennis player from South Korea, is currently trying to create a unified Korean national Ping-Pong team to play at the Asian Table Tennis Championships (ATTC) in Busan in June of next year.

If her efforts pan out, it will be the first time in 22 years that South and North Korean players play on the same stage after the last game played together in 1991 at the World Table Tennis Championships in Chiba, Japan.

Hyun, who will be the head coach for the national female table tennis team at the London Olympics this summer, told the JoongAng Ilbo exclusively over the phone yesterday that “I have been working to win the bid to host the ATTC next year in Busan since last October, and [with that happening], I would like to contribute to creating peace between the South and North by inviting North Korean players and forming a unified national team.”

“Currently, I’m quite occupied with training our players before the London Olympics, and the plan that I have [in creating a unified team] hasn’t been discussed in detail with the Korea Table Tennis Association,” she said. “But I really want this to happen.”

Busan is the home city of Hyun as well as Yoo Nam-kyu, a former table tennis player and a gold medalist in the 1988 Seoul Olympics.

In order for the two separated countries to play together on the same stage, the International Table Tennis Federation must give their approval by May of next year at the latest.

Though the North’s response will be a crucial factor, industry sources note that with South Korea hosting the championships and the Ministry of Unification having the authority to give the green light, the possibility of creating a unified team is high. 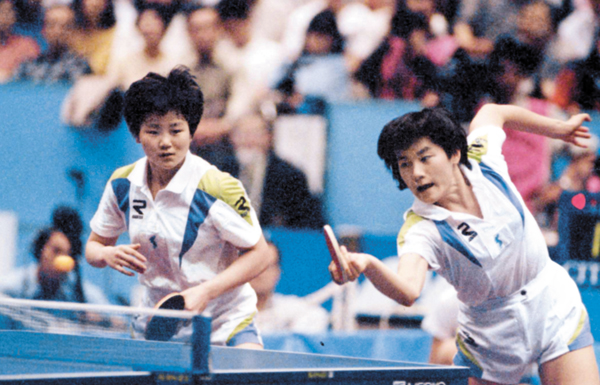 A South-North united table tennis team plays a match at the World Table Tennis Championships in Chiba, Japan, in 1991. On the right is Hyun Jung-hwa from South Korea, and left is Li Bun-hui, from North Korea. The two won the female finals after defeating China. Hyun was at that time 22 years old and Li was 23 years old.[JoongAng Ilbo]


991, the South Korean government discussed the matter with the North before deciding to go ahead with the joint team.

“We are currently mulling over ways to support North Korea in overcoming its extreme drought,” said an official from the Unification Ministry.

“We’re hoping that there will be cultural and sports exchanges in the latter half of this year.”

To realize the plan, the Korea Table Tennis Association is hoping that Hyun would meet with Li Bun-hui, a former female table tennis player from North Korea who is also one of the representatives in charge of the North’s participation in the London Paralympics.

As the coach of the South’s female table tennis team, Hyun will be staying in London from July 27 to Aug. 12, while Li also plans on arriving in London on Aug. 23 with 23 participants of the Paralympics scheduled from Aug. 29 to Sept. 9.

If Hyun extends her stay in London, the two will be able to meet for the first time in 21 years after they played together on the first-ever unified team in 1991 in Chiba.

The two previously had an opportunity to meet last year, but the South’s Unification Ministry had asked Hyun to wait because the political situation was unstable with the North’s missile launch on April 13.

“It would be difficult creating a unified team just by having Hyun meet with Li, but it will definitely create a reconciliation mode between the South and North, which would raise the possibility of creating a joint team,” said an official from the Korea Table Tennis Association.