Hoodlum turns into ‘King of Arrests’

Hoodlum turns into ‘King of Arrests’ 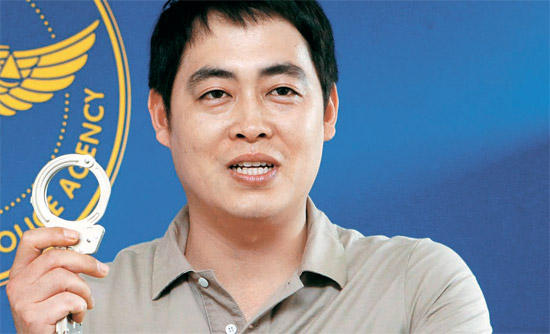 Inspector Kim Joon-nyeon talks to reporters on June 17, after he was dubbed the “King of Arrests.” By Song Bong-geun

ULSAN - One gang member from a nearby pub was brought before the police for refusing to pay for his drinks that cost around 200,000 won ($172) in July 2009, at the Nambu Police Agency in Ulsan.

He claimed he was innocent and cursed and fought back.

A police officer rose with frustration and pulled out the handcuffs.

As the officer silenced the criminal and handcuffed him, he was taken aback. The gang member was actually a high-school friend of his from 10 years ago, a fellow iljin (juvenile delinquent). But instead of saying hello, he arrested the man.

This policeman is Kim Joon-nyeon, 31, from the Ulsan Metropolitan Police Agency.

Dubbed the “bomb detective” by local criminals and the “King of Arrests” by society, he was specially promoted to the rank of inspector, having captured the astounding number of 343 criminals in the past three years.

At the end of 2007, he received a special promotion from the lowest rank to senior police officer. Moving up from regular cop to sergeant usually takes 12 years, but Kim did it in just seven.

“He is so diligent, and when he gets a case, he gets really into it,” said Koh Sung-joon, a fellow inspector. “He was born with the keen ability of investigation.”

However, his years at Ulsan Jae-il High School were far from diligent. Being an iljin there, he bullied and harassed his friends during class, usually for no apparent reason.

“I didn’t like studying and hung out with strong friends who liked to fight. The next thing I knew, I was an iljin.”

Always at the bottom of his class of 53 students, he gave up on college early. But when he graduated from high school, he was taken with regret. He couldn’t find a job because he hadn’t studied in school. He realized that, on this track, he wouldn’t be able to lead a normal social life.

He got rid of his yellow-dyed hair. Then he joined the Army in 2001. With a lung abnormality, he served in noncombat operations, and that’s when his dream to become a police officer began. The motivation behind this was from a mentor who told him he could not live his life this way any longer. He advised Kim to study again and work to become a government official.

With a stature of 177 centimeters (5 feet, 8 inches) in height and 72 kilograms (158 pounds) in weight, Kim said, “I had the confidence to win if I fought. I wanted to put my naive past behind me and live a new life, and becoming an officer was the way.”

After fulfilling his duties in the Army, he came back to take on the challenge of the police officer exam. But due to his lack of education, he had to take the exam four times until he finally passed in July 2005.

His rookie days at the Ulsan Nambu Samsan Agency were not easy. The fellow iljin from high school would incessantly approach him with bribes - but he sternly cut them off. And naturally, he grew apart from these high school friends.

Every day, he came to work at six in the morning and stayed later than everyone else. “A position as a police officer itself was more than I deserved. When I saw myself in uniform, I was filled with energy,” Kim said.

His experience at Ulsan Metropolitan Police Agency’s Cyber Crime Investigation and the Nambu Police Station all showed his true worth and talent. He took into custody 20 criminals who posted insulting writings on then-candidate Lee Myung-bak during the presidential election at the end of 2007, and he arrested two gang groups in Ulsan consisting of 20 members.

After being scouted by the Ulsan Police Agency Investigation Department, he arrested 10 commissioned officers of the Army for receiving 100 million won from a vendor while constructing a facility for the Air Force. So far, the number of offenders he has captured tops 2,000.

His strategy comes from more than 1,000 sources of information. When tackling each case, he collects the necessary information for that case in particular, specific detail. His experiences in youth as a hoodlum help him as well.

However, Kim has had his dangerous moments. In April 2009, while attempting to arrest a convict for theft, the massive, 100-kilogram felon resisted, swinging an iron signboard at him. In blocking the board from hitting him in the face, he broke his arm.

Kim doesn’t simply arrest criminals and put them away. “I persuade them that right now, they can brag about their strength and street fights; but, as the time goes on, they will regret what they did and they won’t be able to get any better in society than a gang member or a thief,” Kim said.