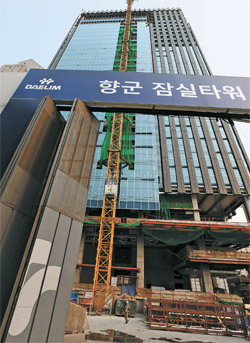 The Korea Veterans Association is under fire for mismanagement of its finances that resulted in a loss of 79 billion won ($68 million) from the pockets of its 8.5 million members, which include all Korean men who have done compulsory military duty.

The loss stems from the association lending its name and signing as guarantor for its poorly managed low-credit businesses, which include apartment construction and highway rest area services.

The Seoul Southern District Prosecutors Office said Thursday that the proprietor of one of the five businesses managed directly by the veterans association, a 40-year-old man surnamed Choi, was arrested on Monday for embezzlement of company funds.

Prosecutors said a large-cap company identified as “G” and three other Kosdaq-listed companies received a total of 79 billion won in loans from “C,” a special purpose company under KTB Investments & Securities Co., with the Korea Veterans Association signing as a guarantor. The loans were made between April 2011 and February.

Thus, KorVA arranged for these companies, which barely had funds to operate, to receive 13 to 31 billion won.

In the process of transferring the loans to the four companies, Choi deposited 27.7 billion won in a bank account under the name of KorVA and withdrew amounts when he wanted to. Prosecutors said that with the intent of using the money for personal use, he used the KorVA seal instead.

And despite the loans, company “G” was delisted in January and two more of the companies were delisted in March and May.

As guarantor, the veterans association was left to pay off the 79 billion won.

The Korean Veterans Association stated, “It is not possible to receive money from the companies,” and added, “It is known that Choi is not in a capacity to pay any back, either.”

The association stated that Choi used the embezzled money to pay back loans from previous failed businesses or gamble at Kangwon Land Casino.

After mismanagement of its investments, the Korea Veterans Association already has a 500 billion won debt from investment failures since 2007 and indicated its coffers are now dry.

In 2009, an apartment construction project investment failed and in 2010, executives of the association were arrested for receiving bribes and solicitations.

The Korea Veterans Association, established in 1952, is under the auspices of the Ministry of Patriots and Veterans Affairs. It has 3,600 branches nationwide and 17 abroad in 11 countries, including the United States and Canada.

While audit law indicates otherwise, the association has been exempt from auditing for 20 years on the account that “it was not necessary,” which prosecutors say contributed to its poorly run finances.

Prosecutors indicated they will further investigate the association’s accounts.