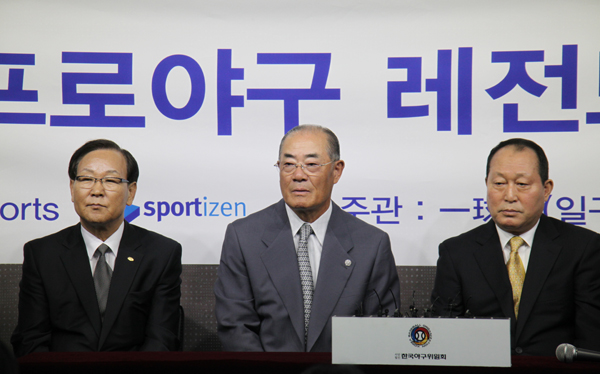 Isao Harimoto, center, a representative from the Meikyukai, Kim In-sik, right, head of the technical committee of the Korea Baseball Organization, and Lee Jae-hwan, chairman of the Ilgu Club, announce the launch of the Korea-Japan Legend Match during a press conference in Seoul last month. Provided by the Ilgu Club


Sun Dong-yol, Lee Man-soo and 20 other legendary Korean baseball players will reunite for a friendly baseball match between Korea and Japan’s old-timers slated to be held in Seoul next month, according to the organizers of the match.

The Ilgu Club, an association of retired Korean baseball players, which is organizing the match on Korea’s part, announced on Friday a 22-member list for the Korea-Japan Legend Match.

The disclosure of the list follows last month’s announcement by the organizers that they will hold the match, the first of its kind, at Jamsil Stadium, southern Seoul, on July 20.

The Meikyukai, the gathering of Japan’s Hall of Famers, worked with the Ilgu Club to launch the friendly match.

The Ilgu Club said it selected seven pitchers for the Korean team among those who recorded 100 wins or more including Sun, who helped the Kia Tigers win six KBO championships during his 11-year stint at the KBO through 1995.

Lee Man-soo, the former record holder for the most home runs, hit 252 homers during the 16 KBO seasons with the Samsung Lions. He was selected as the catcher for the Korean dream team.

Lee Jong-beom, who last month wrapped up his 19-year career with the KBO, during which he set the record for most hits and steals, also added his name to the roster.

All of the hitters on the team recorded at least 800 hits. Combined, they recorded 21,125 hits, 2,226 homers and 10,425 RBI. Japan is yet to announce a full-member roster but Kazuhiro Sasaki, Sun’s former rival at the Nippon Professonal Baseball, or NPB, who also pitched 228 games in the Major Leagues, is confirmed as a starter for the team, according to Isao Harimoto, a representative from the Japanese side.

Sun, when he played with the Chunichi Dragons in Japan, recorded 38 saves in the 1997 season, becoming co-leaders of the NPB’s central league with Sasaki. Sasaki recorded 45 saves the next season over Sun’s 29 saves. In 1999, Sun had 28 saves compared to Sasaki’s 19 saves.

Harimoto, a Korean-Japanese who holds the record for the most hits in the NPB, announced the plan to host the Korea-Japan Legend Match during a press conference in Seoul last month.

“Although it is a friendly match, we will show our best to the fans,” said Harimoto, also known by his Korean name Jang Hun, during the press conference.