Getting attention for gugak by mixing it up

Getting attention for gugak by mixing it up 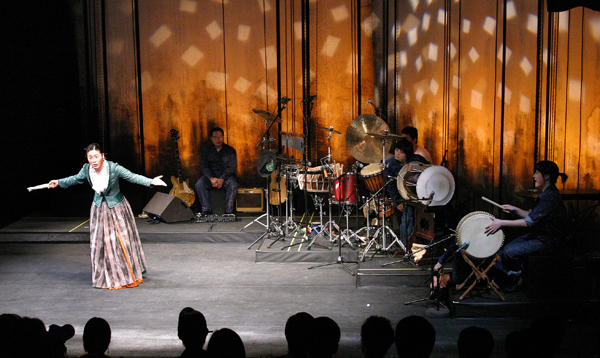 
Attending gugak, or traditional Korean music, concerts isn’t everyone’s favorite pastime. Only the most patriotic Koreans still attend events where they can listen to the instruments gayageum, haegeum or piri to honor the traditional culture, even though they have to try every trick in the book to stay awake.

Traditional Korean music has developed over a period of 2,000 years in the country but has barely managed to survive in the past century. To reverse this trend, some gugak musicians - who themselves had once shunned traditional music - have made efforts to attract larger audiences in new ways. The product of their work is the Yeowulak Gugak Festival, founded in 2010, in which most performances combine gugak with other genres that are potentially more popular or well-known.

Marking its third anniversary this year, the Yeowulak Gugak Festival has tripled in size, with 13 performing groups participating at various venues of the National Theater of Korea for 19 days from July 3. The first festival had only four performing groups.

“Even though it’s ‘ours,’ it’s no use if people don’t want to listen to it,” said Kweon hye-mi, an official from the National Theater of Korea during a press conference last week. “We’ll make sure ‘our music’ is loved by both Koreans and foreigners through this annual festival.”

All participating artists, including the pansori (narrative singing) prodigy Lee Ja-ram, who will be presenting the famous “Sacheon-ga,” said in chorus that they believe gugak is “our music that should never be forgotten.”

The internationally acclaimed Japanese-Korean pianist Yang Bang-ean, who was one of the performers at last year’s festival, gladly accepted the offer from organizers to become the artistic director for this year’s festival, he said.

“I participated in last year’s festival as a performer, and it was refreshing. Before, I didn’t know there was such a festival that presents a mixture of traditional and nontraditional music. It definitely changed how I perceive gugak in a positive way,” Yang noted. “I hope this festival becomes a way for musicians to communicate with each other and for us to communicate with audience members as well. It could positively change how they perceive gugak, just like it did for me.”