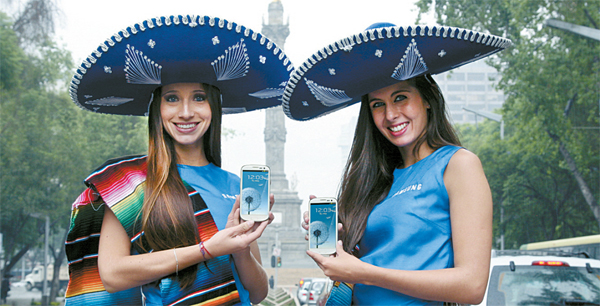 Models in Mexican hats show off Samsung Electronic’s Galaxy S3 on Thursday. The flagship smartphone was rolled out in the United States and Mexico on the same day. Provided by the company


Samsung Electronics is finally releasing its Galaxy S3 smartphone today in Korea, almost two months after the highly anticipated flagship model was unveiled for the first time internationally in London.

The tech juggernaut said it will hold a press conference at 10 a.m. to last until 11:20 a.m. today, with a product presentation led by J.K. Shin, head of its IT & Mobile Communications Division, at the company headquarters in Seocho, southern Seoul.

The media hoopla in London took place on May 4 under the name “2012 Mobile Unpacked Event.”

Galaxy S3 will arrive here in two models, depending on connectivity types: one with 3G and the other with the much faster long-term evolution connectivity. Samsung said both will be showcased at the conference but the LTE-enabled model will go on sale later ? in mid-July at the earliest. All three carriers ? SK Telecom, KT and LG U+ ? are putting Galaxy S3 on their shelves and SK Telecom said on June 12 it received advance orders from customers for 5,000 units of the 3G-enabled model in just two hours.

Galaxy S3 was first released across 28 countries on May 28. It started sales in the United States on Thursday through T-Mobile USA and AT&T. In coming weeks, it will be sold through Verizon Wireless, Sprint and U.S. Cellular.

“A Samsung handset circulated in the U.S. market with all of those five carriers is unprecedented,” said a Samsung spokesman. The model also debuted in Mexico on the same day.

Samsung said it has already received preorders from vendors for over 10 million units as of mid-May, whereas the two previous generations have posted combined sales of more than 50 million units in the past two years.

U.S. District Judge Lucy H. Koh in San Jose, California, said she hopes to rule on Apple’s request to block sales of Samsung’s Galaxy Nexus smartphone before the hearing. This month, she expedited evidence-sharing for Apple’s bid to block sales of the Galaxy S3.

The world’s two biggest makers of high-end phones have accused each other of copying designs and technology for mobile devices and are fighting patent battles in four continents to retain their dominance in the $219 billion global smartphone market. The June 29 hearing will address Apple’s third request to block sales of Samsung’s tablet computer.

On Tuesday the appeals court reaffirmed its May determination that Apple’s patent on a design of the tablet is likely to withstand challenges to its validity. That decision allowed Apple to renew its request to block sales of Samsung’s tablet in the U.S.