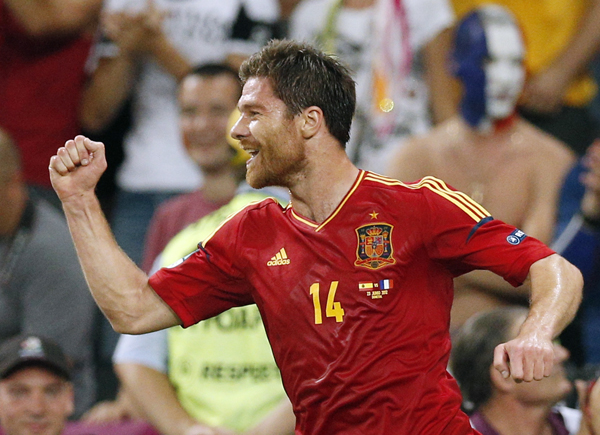 
DONETSK, Ukraine - Even if Spain failed to live up to expectations, Xabi Alonso exceeded them.

The defending champions, who are trying to win a third straight major title, advanced to the European Championship semifinals with a not-so-commanding 2-0 win over France on Saturday. In the next round, Portugal and star player Cristiano Ronaldo could provide a much sterner test.

“These types of games, in this type of competition, are always very tense,” Spain coach Vicente del Bosque said of Saturday’s win, “and you need to have the know-how to win them.”

The Real Madrid midfielder celebrated his 100th international appearance with an early header and a late penalty, a pair of rare goals from a player more accustomed to anchoring the back of the six-man midfield rather than pushing forward with the rest.

“I could never have imagined to reach my 100th cap, to go to the semis and score two goals,” Alonso said. “Hopefully the 101st will be better.”

Spain’s next match will come on Wednesday against Portugal, again at the Donbass Arena in Donetsk. And with Ronaldo improving as the tournament progresses, Spain will likely have to improve as well to earn a chance to defend its title.

Saturday’s opening goal was the result of excellent one-touch soccer - the hallmark of Spain’s game. Andres Iniesta prodded the ball through for Jordi Alba, who whipped a perfect cross from the left. Alonso timed his run so well that no France defender picked him up.

“He knows how to sacrifice himself, help the team and where to play,” del Bosque said of Alonso. “He is one of the attacking strengths of ours. He knows how to create and finish.”

The win was Spain’s first-ever over France in a competitive match in seven attempts. But France wasn’t that competitive Saturday, managing only one shot on target.

“When you lose a game there’s always something missing, I’m not sure if it’s possession or technical ability,” France coach Laurent Blanc said. “The lads gave everything and it’s very hard to play against Spain. We blocked their left flank, which is their strong point.”

A day earlier, with Chancellor Angela Merkel cheering every step of the way, Germany dominated Greece - on the soccer field.

The Germans reached the European Championship semifinals for a record seventh time by beating Greece 4-2 Friday in a match played amid the contentious political backdrop between the countries.

But just as in the real world, where Germany has been a major contributor to economic bailouts for Greece, the three-time champions were in control at the Arena Gdansk. And after the match, Merkel visited the players in the changing room.

“[Merkel] congratulated us and said that we played very well,” Germany forward Mesut Oezil said. “The rest of what she said will stay among us.”

Philipp Lahm put Germany in the lead in the 39th minute as his team controlled nearly every facet of the game. Although Georgios Samaras tied it for Greece in the 55th, it was all Germany after that as Sami Khedira, Miroslav Klose and Marco Reus scored.

It was the 15th consecutive competitive victory for Germany, dating back to the win over Uruguay for third place at the 2010 World Cup. The Germans will go for No. 16 against either England or Italy in the semifinals on Thursday in Warsaw.